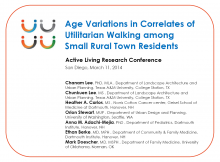 Background and Purpose
Utilitarian walking (e.g., walking for transport) can be readily incorporated into daily routines and can promote health. Walking may hold additional significance for older adults (1) because of its documented role in reducing the risk of functional disabilities (2), cognitive impairment (3), and fall injury (4); and in improving sleep quality (5), physical fitness, and mental health (6). Thus, walkable neighborhoods can contribute to healthy aging and aging in place (7).  Over 25% of older adults in the United States (8) reside in smaller communities and rural towns9, but studies of walking among older adults have focused on those who live in urban communities. This study explores how small towns in rural areas and their specific features contribute to utilitarian walking among elderly residents (10).

Objectives
This study examined relationships between neighborhood environmental characteristics  and utilitarian walking  in a sample of adults from small towns in rural areas in three geographically dispersed regions of the US.  It specifically focuses on how these relationships differ for adults over the age of 65 and younger. Both objectively measured (Geographic Information System, GIS) and subjectively measured (survey) environmental variables were evaluated as potential correlates of walking.

Methods
The study locations included nine small towns in rural areas geographically isolated from metropolitan areas in three regions: Washington State, Texas, and the Northeast. Telephone surveys of randomly sampled adults asked about demographics, race and ethnicity, health and socioeconomic status, walking barriers and facilitators, behavioral factors, and neighborhood perceptions. The sample of 2,140 respondents were categorized as younger (18-64 years of age, N=1,398) and older (65+, N=742) adult groups. GIS data obtained from a variety of secondary sources included seven domains: generalized land use, destination land use, residential and employment density, transportation infrastructure, economic environment, regional location, and natural environment. Area-based neighborhood measurements were taken within a 1-km street-network buffer around each survey respondent’s home. All proximity measures were captured as the shortest street route distance from home to each target location. Multivariate logistic regression models were developed separately for the two age categories to identify significant predictors of neighborhood walking (the odds of walking at least once a week in the neighborhood for utilitarian purposes). Statistical significance in this study was defined as p<0.10.

Results
Three personal variables were associated with walking in both age groups: female gender (-), household income (-), and recreational walking (+). Only one additional personal variable, age (-), was associated with walking among younger adults only, while five more variables were significant in the older adult model: education (+), difficulty in walking (-), screen time (-), lack of time as a perceived barrier to walking (+), and ease of walking to retail, services and transit as a reason to choose their current residence (+). Only one environmental variable, perceived presence of crosswalks and pedestrian signals, was significant in both age groups as a positive correlate of walking. Among older adults, perceived presence of unattended dogs, sidewalks/shoulders, and good lighting were positive correlates, and distance to religious institution and slope were negative correlates of walking. For younger adults, perception of slow traffic speed; cultural, entertainment and recreational land use; intercity transit stops (local transits not considered due to limited availability); and schools within the 1-km buffer were positively associated with walking, while resource production/extraction land use and mall within the buffer were negatively correlated with walking.

Conclusions
This study showed significant differences in correlates of utilitarian walking among younger versus older adults; and also differences from existing studies carried out in urban communities. For example, compared to younger adults, older adults were more likely to perceive such conditions as unsafe crossings, lack of sidewalks, insufficient lighting, and steep slope as barriers to walking. Further, compared to urban settings, differences were also found in the roles of specific land uses (e.g. religious institutions) as attractors or deterrents of walking in rural settings.

Implications for Practice and Policy
This study demonstrates that environmental and policy interventions need to be tailored to the age group as well as the geographic location (rural versus urban) of the target community. To promote utilitarian walking among older small town residents, who are an important target population for healthcare and physical activity promotion, improving street crossing safety by providing clearly marked and signaled crosswalks, improving lighting conditions, providing completed sidewalks/shoulders, controlling attended dogs, and keeping flat/gentle slope in neighborhood streets appear warranted.

Support / Funding Source
This study was supported by a grant from the National Institute of Health (1R01HL103478-01A1).