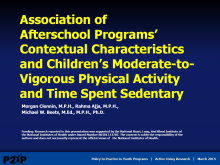 Background and Purpose
Nationwide, a majority of youth fail to meet current physical activity (PA) recommendations, making physical inactivity among youth an important public health concern (1). While past research has identified several settings (i.e. schools, home, neighborhood, etc.) that impact youth PA levels (2-3), the afterschool environment has recently emerged as an influential setting with the potential to substantially impact youth PA levels (4).  With an estimated 8 million youth (age 5-18 years old) attending ASP in the United States, these programs represent an ideal setting to promote PA among a diverse group of children (5). However, very little is known about ASPs characteristics associated with children’s MVPA and time spent sedentary. The purpose of the current study was to examine the relationship between ASP contextual factors, specifically size of indoor and outdoor play space, type of activity (free play vs. organized PA), program length, and MVPA and time spent sedentary among children attending a diverse sample of ASPs.

Objectives
To examine the association of the ASP contextual characteristics and their relationship with MVPA and time spent sedentary while attending an ASP.

Methods
Twenty ASPs across the South Carolina were selected to evaluate the impact of program contextual factors on children’s PA levels. A total of 1,302 children (5-12yrs, 53% boys) wore accelerometers for 4 non-consecutive days while attending the ASPs. The physical size of the indoor and outdoor play space ASP used each day were measured via a measuring wheel (indoor) and GIS (outdoor), and inventoried via direct observation. The type of activity was evaluated via direct observation using the System for Observing Staff Promotion of Activity and Nutrition and classified as a ratio of free-play (e.g., children released to play on playground and open green spaces) to organized (e.g., adult-led structured games) activity offerings based on the percentage of observational scans during physical activity time either indoors or outdoors. Time allocated for PA opportunities was determined from each ASPs’ daily schedule. PA and sedentary behavior were measured using accelerometers (ActiGraph GT3X models) (6-7). Time (min/d) spent in MVPA and sedentary indoors and outdoors was estimated using built-in light sensors (Lux values) (8). The analysis was conducted only on children attending the ASP for at least 60 minutes on a given day. Children’s MVPA and time spent sedentary (min/d) during indoor and outdoor opportunities were evaluated separately in relation to size of the play space, type of activity provided, and amount of time allocated for PA using mixed model regressions.

Conclusions
These findings suggest limited influence of the physical size of play space on children’s MVPA and sedentary behaviors during an ASP and that modifiable programmatic structure, in the form of the type of activity opportunities provided (free-play vs. organized games) was related to both MVPA and time spent sedentary. These are important findings, in that increasing physical play space is not a feasible or realistic strategy for ASPs. Conversely, more children were physically active indoors with the presence of more organized activities, yet this was related to a decrease in MVPA. Thus, future studies should develop effective strategies to increase PA levels by taking into account indoor and outdoor play opportunities.

Implications for Practice and Policy
While the ASP play space was associated with children’s PA, the impact of this was minimal. Additional contextual factors impacting ASP youth PA, such as programming high quality PA experiences, are likely to lead to greater improvements in MVPA and reductions in sedentary behaviors. Policies, therefore, should target the PA programming to ensure children are afforded opportunities to be physically active while attending as ASP.