Atlanta Streets Alive: A Movement Building a Culture of Health in an Urban Environment

Atlanta Streets Alive: A Movement Building a Culture of Health in an Urban Environment 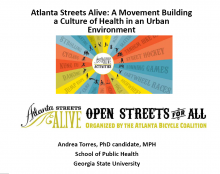 Background
Ciclovias are multisectoral community-based programs that promote the use of public space for physical activity, recreation and socialization by closing streets temporarily to motorized vehicles, allowing access to pedestrians. The Ciclovias movement has grown exponentially worldwide, and in the US, where more than 70 events (called “Open Streets”) have been documented in different cities. The city of Atlanta hosted its first Ciclovia event,   Atlanta Streets Alive (ASA), in May 2010. For this initial event, the city closed 1.5 miles of streets in Downtown Atlanta and opened them for people to become physically active and enjoy a portion of the city safely and in the absence cars.  Since the initial launch of ASA, 8 additional events have been held in different parts of the city. Preliminary evidence has shown a positive association between Ciclovia programs and public health outcomes including  increased physical activity, improved social environments and air quality, enhanced perception of safety, and increased equity in access to recreational activities among low-income populations. In an effort to strengthen the evidence on the public health impact of “Open Streets” programs in the U.S, an evaluation sub-committee was established as part of the larger ASA steering committee. The sub-committee designed and implemented the evaluation of the first 5 ASA events from May 2010 to May 2012.  The purpose of the evaluation was to learn about the characteristics of ASA participants, the influence of the event on their physical activity, as well as their perceptions of safety and neighborhood social capital during the event.

Description
ASA’s evaluation had two components: participant counts and observation and a participant survey. Participant counts and observations included estimating the number of participants, their demographic characteristic, and type of physical activity they performed during the events. Participant surveys included 22 questions that assessed 5 components: (1) physical activity, (2) transportation mode to the event (3) social capital and safety perceptions, (4) characteristics of participation and perceptions about the event, and (5) demographics.

Lessons Learned
Participant counts The estimated participation at the 5 ASA events was 28,143 participants. The majority of participants were adults in each ASA event. Youth accounted for between 9 and 15% of participants.  The activity most commonly observed was walking across all five events. Survey A final sample of 589 surveys was included in the analysis. Overall, 19.4 percent of participants met the weekly PA recommendation of 150 minutes of PA during one ASA event. The estimated average number of minutes of PA for participants at the 3 events was 99 minutes. Walking and cycling were the most frequently primary activities reported at ASA (73.7% and 37.7%, respectively). Ninety-seven percent (97%) of participants reported feeling safe or very safe at ASA. Similarly most respondents agreed that ASA was an event that welcomed everyone (99.7%), and that people at “ASA” generally get along with each other (93.9%). Thirty eight percent (38%) of respondents indicated they would be at home indoors, watching TV, or on the computer if they were not participating at the event.

Conclusions
Attendance at ASA has increased significantly from approximately 5,000 in 2010 to more than 60,000 participants in 2013.  The route has expanded reaching some of the main streets in the city and increasing the number of miles of streets closings, ranging from 3 miles to 5 miles in 2013. Such growth suggests that ASA has been a widely received program, one that is beginning to achieve sustainability through partnerships and sponsorships. The preliminary findings of this study support previous research that have identified Ciclovias as promising interventions to increase PA levels while providing opportunities for recreation and health promoting social environments. The goals of increasing PA and decreasing sedentary time are important for population health in Atlanta given the strong evidence that shows that physical inactivity increases the risk of adverse health conditions including non-communicable diseases.5,6 Data from 2012 showed that 53.8% of the adult population in Metro Atlanta were not physically active at least moderately,7  60.9% were overweight or obese,8 and 8.7% had diabetes.7

Next Steps
This study provides important preliminary information to understand the potential impact that ASA can have in the local areas where it is implemented. However, future evaluations should increase efforts to move beyond cross-sectional evaluation to pre and post assessments in communities where ASA will be implemented for the first time. There is much to be learned from Open Streets events across the nation and internationally. More research is needed to build the evidence base for such programs.