Attitudes Towards Walk/Bike Issues and Its Influence on Students' Travel Behavior: Evidence from NHTS, 2009

Attitudes Towards Walk/Bike Issues and Its Influence on Students' Travel Behavior: Evidence from NHTS, 2009 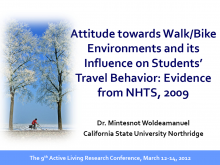 Background
According to a study by the Federal Highway Administration, in 1969 about half of all students walked or bicycled to school. Similar studies showed that today fewer than 15% of all school trips are made by walking or bicycling, and over half of all children arrive at school in private automobiles. This decline in walking and bicycling has had an adverse effect including a risk for a variety of health problems. Safety issues are a big concern for parents, who consistently cite traffic danger as a reason why their children are unable to bicycle or walk to school.

This research describes the analysis results of the 2009 National Household Travel Survey (NHTS) focusing on how students' and/or parents’ view of issues related to the walking and biking environments; and the implication of their attitude on students’ travel behavior. The survey includes latent responses about how students and/or their parents view various aspects of the walking and biking environments. It is hypothesized that students’ and/or their parents’ attitude towards the walk/bike issues would be a factor in their choice of different modes of transportation and their other travel behaviors.

Objectives
The primary objective of this study is to understand the parametric and causal relationship between attitude towards walking and biking environments and students’ travel behavior. Also, it sought to find whether attitude towards specific walk/bike issue may persuade students to make a healthy travel choice.

Methods
The recently released National Household Travel Survey (NHTS) is used for the analysis by sorting and filtering the attitude variables for school-related trips. NHTS is one of the most important surveys of the U.S. Department of Transportation and is conducted periodically to assess the mobility of the American public. The survey gathers trip-related data such as mode of transportation, duration, distance, and purpose, and then links the travel related information to demographic, geographic, and economic data. The 2009 NHTS is a nationally representative survey of travel behavior conducted from April 2008 through April 2009. Using the data sets, Ordered Probit Model is applied for parameters estimation and formulating the likelihood functions. The reason this method is chosen is that the rating for respondents view on walk/bike issue are inherently ordered, although it is a multinomial choice variable. In such cases although the outcome is discrete, the multinomial logit or probit models would fail to account for the ordinal nature of the dependent variable, therefore, ordered models have the power to accommodate the ordered/ranking nature of the dependent variable. In the modeling process, the respondents’ ranked response on their attitude towards the walk/bike issues is considered as the dependent variable. Since the aim of the study is to investigate the effect of attitude on travel behaviors, variable related to the trip-maker, the trip itself and location factors were considered as independent/explanatory variables.

Results
Out of the 22,000 respondents that answered school-related questions about 57% of them lived in a distance of more than 2 miles from their school. Only 7% lived with less than ¼ miles. The majority of respondents stated automobile as their primary mode to and from school (53% to school and 46% from school). A significant percentage of students claimed to use public transit (37% to school and 41% from school). Only 8% and 11% respectively said they walk or bike for their trip to and from school. When the walk/bike issues (the possible reasons for not walking and biking) are concerned the result indicated that distance between home and school and the amount and the speed of traffic along the route are cited by many students and/or their parents as major issues. On the contrary, violence/crimes along route and weather/climate in school/residence area are considered as less of an issue by the majority of respondents. The ordered probit results in this study draws interesting causal relationship between students/parents perception about the walking and biking environment and the explanatory variables such as age and gender of the students, weather the attended school is private or public, travel time to reach to school, grade students are allowed to walk or bike with an adult etc. It is also observed that the attitude the respondents have on the walking and biking environments greatly influence their mode preference. Besides, the socio-demographic and mode-related variables have an influence on the way students or their parents perceive different attributes of the walking and biking environments (or the vice versa).

Conclusions
The modelings as well as the descriptive results give a significant insight for local communities, planning officials and municipal government in providing walk/bike friendly routes to and from school. This study signifies that planners and transportation service providers ought to give appropriate attention to this latent variable (attitude/perception towards the walking and biking environments) along with revealed preference variables.