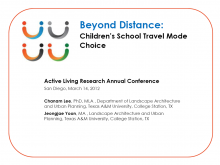 Background
Walking to school is promoted as a healthy alternative to being driven to school. However, private automobile transportation remains the predominant travel mode chosen by the parents, with its mode share of 55% as of 2001 (McDonald 2007). In addition to personal factors, studies found many environmental factors associated with school travel behaviors. Distance by far has shown to be the strongest environmental predictor of school travel mode choice, followed by safety and weather (Martin and Carlson 2005, McDonald 2007, Salmon et al. 2007). However, shortening the distance to school is not simple, as it requires long-term, multi-level policy and environmental changes, such as school siting, zoning, and land development policies/practices.

Objectives
This research probes into what environmental factors, other than distance, require further attention when developing strategies to encourage walking to school. Utilizing pairs of children matched in their home locations but varied in their school mode choice, this study offers insights into more readily modifiable environmental features than the physical distance, that can help parents shift their children's school travel mode from automobile transportation to walking.

Methods
This study was conducted in 22 elementary schools in Austin, Texas, representing a wide range of ethnic and economic compositions (2.3%-97.0% eligible for special lunch, and 5.2%-94.9% Hispanic, TEA). It used two rounds of recently completed parental surveys (response rates=22.7% and 34.2%). The survey instrument was developed based on the literature and three previously validated instruments (Varni et al. 2001, McMillan 2003, Forman et al. 2008). This study analyzed a subset of 699 walker-driver pairs with each pair attending the same school and living in the same or close (≤ 200 feet) home locations. "Walkers" versus "drivers" in this abstract refer to parents of children who walked versus drove their children to school. Geographic Information System was used to geocode home locations and to generate the shortest routes to school to determine the distance. Paired sample t-tests were used to assess the statistical significance (p<0.05) of the differences between walkers and drivers.

Although the distance was the same in each pair, walkers were more likely to consider the distance to be close enough for walking than drivers (72.6% vs. 61.7%). Notably, 61.7% of the drivers still considered the distance to school to be walkable, confirming the presence of other important environmental and personal barriers to walking. Compared to drivers, walkers were more likely to agree that both their children and they walk quite often in the daily routine; they enjoy walking with their children; and their children think walking to school is "cool." Walkers also perceived their environments to be convenient and quiet, and have social supports, such as seeing other children in their neighborhoods walking to school and having family and friends supporting the idea of walking to school. Findings also showed some evidence of residential self-selection, as walkers were more likely to consider "close to my child's school" and "easy to walk around," when choosing current neighborhood locations.

The major determinants for parents to drive their children were safety concerns. Drivers were significantly more concerned about their children getting lost, being taken or hurt by a stranger, being attacked by stray dogs, and being hit by a car, while walking to school. In addition, drivers felt more strongly about driving being easier and faster than walking.

Regarding the quality of home-to-school routes, walkers were more likely to report the presence of parks, while drivers were more likely to perceive convenience stores (which often accompany gas stations in our study area), bus stops, large office buildings, and roads with busy traffic. Walkers responded more negatively about the sidewalk conditions, which can be explained by the fact that only those who use the sidewalks (i.e., walkers) will be aware of problems such as maintenance and blockage.

Conclusions
Walkers' attitudes toward walking and perceptions of their neighborhood environments were more positive than drivers'. The major parental determinants for driving their children were safety concerns related to traffic, crime, injury and being lost. Policies and environmental improvements to enhance safety of child pedestrians appear to be the key to facilitate mode shift from driving to walking. Continued efforts to improve sidewalk conditions and social supports seem important to keep current walkers walking (more).