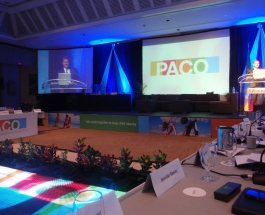 The government of the small island of Aruba (population 120,000) is taking leadership in developing a consensus on obesity prevention and control throughout the Americas, especially regarding children. Dr. Richard Visser, Minister of Health and Sport, is the driving force behind this effort. Last year the Pan American Conference on Obesity (PACO) recommended placing higher priority on actions to prevent obesity, and this year PACO 2, held June 14-16 in Aruba, created a set of recommended interventions. The recommendations are generally consistent with policy and environment approaches described by WHO and the IOM to improve diet and physical activity, with additional focus on health care interventions, use of technology, media campaigns, and inclusion of obesity issues in international trade agreements.

The program covered a wide range of topics. There were workshops on physical activity, economics, dietary guidelines, and school environments that informed the recommendations. Plenary sessions were chaired by Shiriki Kumanyika. The opening speaker was the Prime Minister who said that impressive economic development was not accompanied by improvements in health, social welfare, and quality of life. We learned that Aruba has higher obesity rates than the US at all ages. Plenary talks included a food industry critique (by Kelly Brownell), agriculture policy, genetics, bariatric surgery, a food industry panel, and ehealth. Country representatives from throughout Latin America and the Caribbean reported on progress, and leaders from WHO, PAHO, FAO, CDC and other key organizations spoke.

There were representatives from 25 countries, and several ministers and members of Parliament were in attendance. There appears to be widespread concern about the health and economic effects of obesity in Latin America, along with a determination to make progress. Several countries described impressive actions so far, and it is useful to have this forum for sharing ideas and perhaps stimulating competition among countries.

Other highlights were truly outstanding and creative healthy meals, documentaries produced in Aruba, and a carnaval-themed closing reception, with dancing. Earlier in the week there was a CDC course on Physical Activity and Public Health as well as a short course on Exercise is Medicine. A commitment has been made to hold PACO 3.