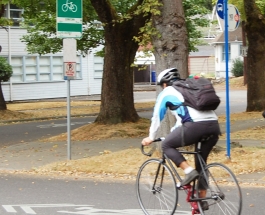 It’s a classic conundrum: policy-makers want to increase bicycling in their communities but don’t know how to meet that goal. They have plenty of research on drivers’ response to a new freeway lane, for example, but none to show how cyclists will respond to a new bike boulevard.

Having worked on this topic professionally, and now as a researcher, I was dismayed with the lack of good evidence on what affects whether and where people will ride a bicycle for transportation. Without data, it's hard to tell a city how to invest its limited resources.

I also knew that, when I was in my 20s, I felt fine riding a bike just about anywhere. Now, in my 40s, I feel differently; I am more risk averse. I suspected that people's reactions to bike infrastructure were much more nuanced than the typical approach of just striping bike lanes where they fit and expecting more people to ride.

With funding from the Robert Wood Johnson Foundation through its national program Active Living Research, I set in out 2007 to address this lack of evidence with the first large-scale study using GPS to record the actual routes cyclists chose.  (Previous studies have relied on surveys or other less-reliable methods of determining routes.) With those data in hand and additional support (read more here and here) from the Oregon Transportation Research and Education Consortium (OTREC), I partnered with researchers Joseph Broach and John Gliebe to model cyclists' route choices, thus revealing their priorities for facilities.

So what did we find? Cyclists take significant detours from the most direct route to use bike paths and bike boulevards, the low-traffic neighborhood streets tailored for bicycling. They’ll also seek out a route with fewer turns, without steep uphill climbs and where traffic lights help them cross busy streets. In fact, these considerations proved as important to cyclists as the bike facilities themselves. Our findings are being published in the scientific journal Transportation Research Part A.

This research has already given planners tools for more effective investments. Metro, the Portland area’s metropolitan planning organization, has incorporated the findings into its regional travel demand model. Now, when local governments want to study the impact of a bike trail along a suburban light-rail line, to use one recent example, or to compare a host of possible improvements to a state highway corridor, to use another, they can run the model to find the most effective way to meet their goals.

Metro has fielded calls on the bicycle modeling application from its counterpart planning organizations in Denver, Seattle, San Diego and elsewhere. The Eugene, Ore., Lane Council of Governments adopted the research into its own travel demand model.

In addition, the open nature of the research allows for endless new uses. Transit agency TriMet has woven the research values into its multimodal Map Trip Planner software. Users receive customized directions based on the value they place on quick, flat or bike-friendly routes. The open-source OpenTripPlanner uses these same values and has been adopted in 10 countries and five North American cities since its Portland launch.

We hope and expect that this research will continue to spur both innovation and the research-backed decision making that directs investments where they are most needed.

Your part in making it a safer bike environment deserves a reward.

I'd hesitate in weighting cyclists' current behavior too highly, in effect locking in present behaviors, because it's partly a response to infrastructure that is tremendously ill-suited to our needs. I take a circuitous route when I ride to work because the main thoroughfares are unsafe. However, I'd prefer a safe, divided bike lane on these routes. Until this happens, I'll continue to wind my way through residential streets, which is inconvenient, and also no good for the businesses I would pass along the way.

Even after I fill in all the requested information as a public user the OTREC web page refuses to download the paper. Keeps requesting information that I already typed in. Is it available elsewhere?