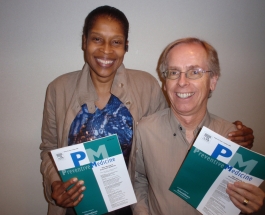 Yesterday at a meeting in Sacramento of about 70 people discussing how to improve physical activity and diet of California school children, we all refreshed our bodies and brains with an Instant Recess break. As always, everyone enjoyed the activity, and for many of us it was a special joy to see Dr. Toni Yancey in her prime and be reminded of one of Toni's many contributions to the physical activity field. Then at the end of the day they announced that Toni had died. That hit hard.

I think of Toni as having two primary missions in the latter part of her career, though I don't want to minimize the contributions she has made in many more areas. Toni was THE leading advocate for a stronger response by the public health and medical communities to the burden of chronic disease caused by the epidemic of physical inactivity. She was outraged by the tepid and lackadaisical public health and medical response to one of the defining health challenges of our time. She did not accept this situation and worked harder than anyone I know to build recognition, commitment, and resources to physical activity promotion. We were partners in this fight, and the photo shows us holding the 2009 theme issue of Preventive Medicine on raising the priority of physical activity that Toni guest edited. Carrying on this work will be a fitting tribute to Toni, so I encourage all of you to advocate for more action to help people be more physically active.

Her other core professional passion was improving the health of disadvantaged populations. It reveals much about her goals that she founded the Center to Eliminate Health Disparities at UCLA. Though she was a peer of elite athletes, she developed programs for the least fit and least interested in physical activity. I think her goal was to develop activity programs that her grandmother could do and enjoy.  Her trademark Instant Recess program began a whole new category of physical activity interventions, tailored to inactive people who could be successful with the gentle moves. Instant Recess will live on and be part of Toni's legacy. It was a real pleasure to see Toni recognized for this work with an award at the 2012 Weight of the Nation meeting in Washington, DC. During the midst of her fight against lung cancer she was able to attend and accept the award. I shot an impromptu video of her lifting two of the awards. To me, this video is a symbol of her strength of spirit during the most difficult time of her life. Notice the broad smile.

Toni was a special member of the Active Living Research family. She was a grantee, a colleague had a grant to evaluate Instant Recess in schools, and ALR supported one of her doctoral students with a Dissertation Grant. Toni was particularly instrumental in our quest to integrate physical activity throughout the ALR Conference. Starting with the second or third ALR Conference Toni either led a live Instant Recess, sent students to lead a break, or we used one of her many videos. She even brought sports celebrity friends to give some added pizzaz to the activity break. The culmination was the filming of an Instant Recess routine in February 2013 that was created by attendees of a workshop at the 2012 conference. In February 2013 we knew Toni was critically ill, so we declared the filming a tribute to her, and it was gratifying that she was able to watch the filming live in a great use of iphone technology. The ALR Instant Recess will soon be posted on both the Instant Recess and ALR Youtube channels. Please use it at your meetings.

ALR will continue to honor the memory of Dr. Toni Yancey. As opportunities to pay tribute to Toni arise, we will post those announcements on our website. Please send us your ideas for how ALR and the broader research and practice fields she dedicated her career to can honor her life's work.

You may want to see my personal appreciation on my website, http://sallis.ucsd.edu.

All of us at Instant Recess thank you for this moving tribute to our hero and inspiration. Toni's legacy will indeed carry this important work forward.

Here's a great video of Toni performing her poem 'Recapturing Recess' during her Play On 2010 speech.

What a great impact Toni Yancey has had on the field of public health and promoting physical activity....thanks for keeping it alive!!! Love you Toni!

Toni will always inspire us to do more, be more for those that need us. Toni is a real life hero. I'm thankful for knowing her.

This is very much clear that so many people love you, Toni. You will always be remember by us for the work you did for the society. Children will recall by the quotes, you delivered to motivate them for the physical activities. You were such an inspiring persona that no one can forget you here. I want to dedicate one of goodbye quotes by Mahatma Gandhi - There are no good-byes, where ever you'll be, you'll be in my heart. Even though these kind of goodbye quotes can not show the actual feeling but still this what I can express in words. Miss you.