Can Built and Environmental Factors Encourage Walking Among Individuals with Negative Walking Attitudes?

Can Built and Environmental Factors Encourage Walking Among Individuals with Negative Walking Attitudes? 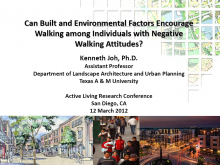 Background
After decades of automobile dominance in America, walking is back in style. For a multitude of reasons, an interdisciplinary group of scholars and practitioners have converged on the notion that walkable neighborhoods are once again desirable, from architects and urban planners to environmentalists and public health professionals. While there is broad ranging consensus about the positive benefits of walking, such as reducing obesity and promoting physical activity, there is less certainty about factors that promote walking in neighborhoods. Is it the built environment, social environment, or lifestyle attitudes that can explain why some individuals walk more than others?

Methods
This study relies primarily on travel survey data from 2,125 households in eight neighborhoods in the South Bay area of Los Angeles County, California. The selected neighborhoods include mixed-use centers (“center”) and auto-oriented corridors (“corridor”). Data from the travel survey was merged with other publicly available data sources, including the 2000 U.S. Census, crime data from the Bureau of Justice Statistics, neighborhood business data (NAICS/SIC codes), and GIS parcel data maps. Negative binomial regressions were used to analyze differences in neighborhood walking trips for individuals with positive and negative attitudes toward walking. The sample was stratified into two groups based on attitudinal differences (“high walk” and “low walk”) according to an attitude index constructed from selected questions on the survey. Six regression models examine the relative strength of sociodemographic, social environment (violent crime rate and attitudes toward neighborhood safety) and built environment variables (density of neighborhood businesses, percentage of 4-way intersections, and intersection density) for high walk and low walk samples.

Results
In terms of descriptive results, the proportion of high walk respondents was slightly higher than low walk respondents for both center and corridor neighborhoods in the South Bay area, and the share of high walk and low walk persons was similar across both neighborhood types. Ethnic minorities (Hispanics, African Americans, and Asians) and lower income groups tended to have more positive attitudes toward walking than whites and elderly persons. Individuals with positive attitudes also took more walking trips than persons with negative walking attitudes. The regression results showed distinct differences in predictors of walking behavior between individuals with positive and negative attitudes toward walking. In terms of built environment impacts, the presence of neighborhood retail and service-oriented businesses had the strongest impact on walking trips for high walk persons, while they did not appear to significantly impact those with neutral or negative attitudes. Street connectivity measures did not impact walking trips as much as the presence of neighborhood businesses. Among social environment variables, violent crime rates had a stronger negative impact on walking trips than attitudes toward neighborhood safety, especially for those with negative walking attitudes.

Conclusions
The study reveals that the social and built environments have a differential impact on neighborhood walking trips for individuals with positive and negative attitudes toward walking. In particular, the presence of nearby neighborhood businesses had a stronger positive impact on walking trip rates for high walk individuals than those with low walk attitudes. This suggests that having nearby destinations to walk to matter more for residents with positive attitudes and that not all persons equally take advantage of nearby retail and service opportunities. Furthermore, persons with neutral or negative attitudes towards walking were more deterred by crime rates than those with positive attitudes. This research also highlights the importance of understanding the role of individual attitudes in pedestrian travel. Scholars and practitioners have traditionally focused on urban design approaches to promote walking while strategies to promote more positive walking attitudes have received scant attention. Cultural and societal factors may also play a role in influencing walking attitudes, illustrated by the prevalence of walking and bicycling in many European and Asian countries. Based on the evidence from this study, high walk persons are likely to walk even more if there are nearby destinations, while low walk persons are less likely to walk, even if they live in a pedestrian-friendly neighborhood. Therefore, increased education and public awareness to emphasize the health benefits of walking and physical activity should be pursued in tandem with pedestrian-scale planning to encourage a shift towards more positive attitudes towards walking.