Context-Specific Correlates of Walking to School: Do They Vary Across Neighborhoods & Populations? - Presentation

Context-Specific Correlates of Walking to School: Do They Vary Across Neighborhoods & Populations? - Presentation 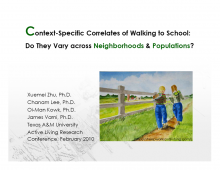 Background:
Walking to school is being increasingly promoted as a way to establish healthy habits from early childhood. Correlates of walking to school may differ across environmental contexts, but such potential differences have not been studied thoroughly. Previous studies often rely on a single measurement method, leading to limited reliability and depth. These gaps deter the development of tailored interventions with optimized effects.

Methods:
A triangulation of three methods was used. (1) Surveys were conducted with 679 parents from four elementary schools to capture personal, social, and perceived physical environmental factors. For each context, factor analyses were used for data reduction and binary logistic regressions were performed to predict the odds of walking to school. (2) Focus groups were conducted in English and Spanish with 15 parents from these schools to gain deeper understanding of their decision-making for children’s school travel. Results were transcribed and examined using content analysis. (3) GIS was used to objectively measure the spatial patterns of walking to school.

Results:
From the survey, parents’ personal barriers were consistently negative correlates of walking to school across all three contexts (Table 1). Several environmental variables showed significant associations with walking in the inner city and urban contexts, but none were found significant in the suburban context. Distance to school and presence of office buildings or convenience stores en route was significant in the inner city or urban settings. Safety concerns and lack of marked crosswalks were negative correlates in the inner city only. Highway barrier was a major deterrent to walking in the urban context, which was further confirmed in the focus group discussion and the GIS analysis.
The inner city focus group discussions raised safety and social problems related to crimes, drugs, and bullying. The GIS measurement of this area revealed a significantly higher crime rate of 96 offenses/year/100 acres, compared to only 5 in the suburban and 79 in the urban contexts. Collective evidence gathered from all three methods showed that the foremost concern in the urban context is traffic-related safety. Although the actual crash rate is slightly lower than the inner city, the perception of traffic danger is higher likely due to highways and arterials located closely to the urban schools. The predominantly white suburban context had relatively lower rates of crime and traffic crash rates. Parents in this setting brought up the potential benefits of walking and value the opportunity to interact with their child when they walk their child to school. They also pointed out visual quality of their neighborhood to be a motivator for walking.

Conclusions:
Data collected from the three methods uncovered that parents from different environmental contexts consider different factors to be important for their child’s walking to school. These findings suggest the importance of tailored intervention strategies. Traffic dangers appear to be the key barriers among urban students. Students in the inner city, low-income neighborhoods are more likely to be “captive” walkers facing increased traffic and crime threats, and their needs should be given priority. While the priority for urban and inner city contexts seems to be to lift the barriers, targeting the motivators may be more successful in suburban settings. Further studies are needed to understand the context-specific correlates of walking to school. The use of multi-faceted data collection strategies may also be useful for confirming and comparing findings.

Support:
This study is supported by a grant from the Robert Wood Johnson Foundation’s Active Living Research Program.