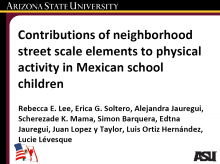 Background
Residence in neighborhoods where streets are safe, attractive, and connected has been related to physical activity (PA).[1,2] Research has focused more on adults and has been conducted in high income countries.[3] This relationship is as yet undocumented in most low and middle income countries, such as Mexico, an emerging influence on North American countries, and burdened with the highest childhood obesity rate in the world. Specific types of environmental factors might influence particular types of PA (eg, recreational, transportation) differently;[4] however, many of these findings are based on perceived or resident self-reported environmental variables with few studies using objective, in-person audits of the environment.

Conclusions
Outdoor play may occur on streets with fewer street elements that focus on pedestrian safety and comfort (buffers, connectivity, crossing aids, amenities), on streets that may have less traffic (fewer lanes, control devices). Perhaps these are quieter streets with less traffic and fewer pedestrian enhancements. Participation in sports and other organized activities was related to few neighborhood variables. Participating in other organized activities was associated with having more children in the household (not shown). Perhaps participation in extracurricular activities is driven by time and access to resources.

Implications
The lower levels of participation in play, sports and other activities suggest that strategies at all levels are needed to increase PA among Mexican children. Increasing access to safe and pleasant areas in neighborhoods may help to increase PA.

Support / Funding Source
This work made possible by a Fulbright-García Robles Core Scholar Fellowship awarded to Dr. Lee, the Canadian Institutes for Health Research and the Public Health Agency of Canada.