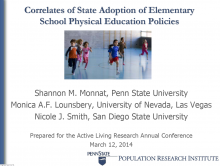 Background and Purpose
Physical education (PE) is a key evidence-based strategy for providing and promoting physical activity, reducing childhood obesity, and improving academic performance, yet the majority of American children do not receive the recommended weekly minutes, and standards for PE curricula, teacher certification, and student fitness assessment vary tremendously across states. In 2003, the National Cancer Institute began collecting and scoring state-level codified laws for PE in schools. These data provide a unique opportunity for researchers to examine differences and changes over time across all 50 states and Washington, DC. While previous researchers have used these data to examine associations between state-level policies and actual amount of time allocated to PE, to date, no research has attempted to predict state-level adoption of PE policies. Understanding what motivates or prohibits states from adopting PE laws is important for children’s health, especially in our current ‘new federalist’ political context wherein public health decision-making is increasingly devolved from the federal to the state level.

Results
We found tremendous variation in PE requirements across states. As of 2010, only 4 states (Florida, Louisiana, Mississippi, and Oregon) required elementary schools to provide at least 150 minutes of PE per week, and the majority of states (63%) required less than 60 minutes. In addition, the majority of states (61%) had no fitness assessment requirement/recommendation. PE curriculum standards and staffing requirements were more common; over half of states require newly-hired PE teachers to have certification, licensure, or endorsement and a college minor or major in PE. In addition, over half of states require that PE address students’ PA knowledge, behavioral and motor skills and/or fitness, and over half of states reference and incorporate curriculum standards from NASPE, a specific state agency, or another organization. Interestingly, states with more vulnerable populations (e.g. higher percent poverty, higher percentage of students eligible for free/reduced lunch, higher percentage of single mother households, lower median household income, higher percentage of black students, and higher percent black population) were more likely to have adopted stronger PE time requirements and to have incorporated curriculum standards from NASPE, a specific state agency, or another organization than states with more secure populations. With the exception of being negatively related to stronger PE staffing requirements, state-level political characteristics were not associated with the adoption of any PE laws that we examined. Finally, student academic achievement was inversely related to both PE time requirements, the incorporation of specific curriculum standards, and fitness assessment requirements. Specifically, states with a higher percentage of 4th graders scoring below the proficient level in math were more likely to have stronger PE time requirements, 4th grade math and reading scores were negatively associated with the incorporation of specific PE curriculum standards, state-level improvement in 4th grade math scores from 2003 to 2009 was negatively associated with PE time requirements, and improvement in both 4th grade math and reading scores was negatively associated with PE fitness assessment requirements.

Conclusions
States with vulnerable populations are more likely than those with economically stable populations to adopt stronger PE time and staffing requirements and to incorporate curriculum standards from NASPE, a specific state agency, or another organization. The adoption of such laws is also inversely associated with student academic performance and improvement in performance over time, suggesting a potential trade-off at the state level between investment in PE requirements and investment in student academic achievement. The results of this research suggest that more affluent states may be valuing and investing in academic achievement over PE.

Implications for Practice and Policy
This study highlights tremendous variation in state’s adoption of elementary school requirements related to PE time, staffing, curriculum, and student fitness assessment. This and other studies illustrate that time, funding, and co-existing priorities are perceived barriers to investment in PE. It may be that as a prelude to PE policy adoption, evidence illustrating how PE policies can be accomplished within the existing time and funding structures will be needed. To this end, studies that examine modifiable aspects of the structural delivery of PE (e.g. scheduled time, instructional delivery and curriculum models) are needed.