Disparities in Park Availability, Features, and Characteristics by Social Determinants of Health within a U.S.-Mexico Border Urban Area

Disparities in Park Availability, Features, and Characteristics by Social Determinants of Health within a U.S.-Mexico Border Urban Area 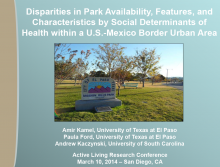 Background and Purpose
Parks are key environmental features for promoting physical activity and health [1,2] and several studies highlight that park availability, features, and quality are often not be equally-distributed across socioeconomically-deprived and racially/ethnically diverse neighborhoods in the U.S.[3-7]  However, to date, little, if any, such research has been conducted in minority-heavy areas along the U.S.-Mexico border where poverty, justice, and health disparities are prominent concerns.[8]

Objectives
The purpose of this study was to examine disparities in park availability, park features, and park characteristics according to median household income and the percentage of foreign-born population in a predominately Hispanic border community.

Methods
All census tracts (CTs) within the City of El Paso, TX were included in the study (n=112). Data on median household income and the percentage of foreign-born population for each CT were extracted from the U.S. Census Bureau’s 2005-2009 American Community Survey. All CTs were categorized into even tertiles (low/medium/high) for both variables. To measure park availability, a GIS shape file provided by the City of El Paso was used to identify all parks within the study area. Using ArcGIS 9.3, the edited park layer was cross-referenced with the CTs layer to determine the number of parks that intersected each CT. Data on park features and characteristics were obtained by a trained auditor visiting each park (n=144) using the Community Park Audit Tool (CPAT), which has demonstrated excellent reliability.[9]  The total number of each of i) park facilities (e.g., playgrounds, basketball courts, trails), ii) park amenities (e.g., benches, drinking fountains, picnic tables), iii) aesthetic features (e.g., landscaping, artistic features, historical/educational monuments), iv) park quality/safety concerns (e.g., evidence of threatening behavior, dangerous spots, vandalism), and iv) quality/safety concerns in the neighborhood visible around the park (e.g., inadequate lighting, graffiti) were summed for each CT. Univariate analyses were conducted on all park variables to provide descriptive statistics and to assess normality (skewness between -1 and 1 and symmetrical histograms). ANOVA F-tests (for normally-distributed park variables) and Kruskal-Wallis X2 tests (for non-normal variables) with post-hoc analyses were used to determine significant (p<.05) differences in the total number of parks, park features (facilities and amenities), and park characteristics (aesthetic features, park quality/safety concerns, neighborhood quality/safety concerns) across CT income and percent foreign-born tertiles (low/medium/high).

Conclusions
This study adds to the current literature on park disparities by income and race/ethnicity and provides evidence of the complexity of examining such issues within a U.S.-Mexico border community. Our findings further demonstrate how publically-available recreational facilities, and their features and characteristics, are often not equally-distributed across neighborhoods by income or foreign-born composition.

Implications for Practice and Policy
The present study was unique in that it highlighted these issues within a predominately Hispanic community. Planners and policymakers must be careful not to negate the reported “barrio advantage” – a paradoxical situation in which certain sociocultural benefits of living in high-density Mexican American neighborhoods (e.g., intact family structures, shelter from negative aspects of American culture) outweigh the disadvantages of high rates of poverty in those neighborhoods [10] – through the provision of less than optimal environmental resources (e.g., parks) as well. Moreover, especially in traditionally under-empowered and under-resourced communities, citizens, health researchers, and policy makers should be encouraged to collectively engage in evaluating community environments to facilitate partnerships and collaborative efforts to make parks and other recreational facilities more accessible, attractive and safe for physical activity for all.[11,12]