Effects of Poverty on Park Use in Southern California

Effects of Poverty on Park Use in Southern California 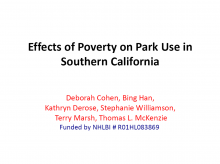 Background
Multiple studies in Southern California indicate that park size and accessibility vary by neighborhood socioeconomic status. How neighborhood SES affects park use and park-based physical activity has not been previously explored.

Objectives
To determine the impact of neighborhood poverty level on park use, park-based physical activity, and park users’ and local residents’ perceptions of park safety.

Methods
We studied 50 parks in Southern California serving a wide diversity of racial/ethnic groups and income levels. We calculated the percentage of households living in poverty level within a 1-mile radius around the park, interpolating block group data from the US Census. We inventoried park facilities and directly observed park use using SOPARC (System for Observing Play and Leisure Activity in Communities) for 7 days, 4 times/day. We surveyed 75 park users and 75 local residents, stratified by distance from the parks: 1/3 from each of 3 buffers: within ¼ mile, ¼-½ mile, and ½-1 mile. We surveyed and interviewed the park directors of each park to collect data on staffing and park-based programming. We aggregated total users per park and the total METs they expended by day, based upon observed physical activity levels. We modeled the longitudinal daily observations using linear mixed-effect models. We log-transformed the observational outcomes to adjust for nonlinearity and heteroskedasticity. We used correlated random intercept and weekend effects for each park. We implemented robust standard errors and analyzed survey items using repeated-measure generalized linear model, since most of the survey outcomes were categorical. Due to the notable heterogeneity between park users and residents, we analyzed these two groups separately.

The number of park users and total METs expended per park were significantly and negatively associated with local poverty level, after controlling for time (season, weekend) and park characteristics (size, local population density, average perception of safety, geographic setting). The magnitude of the relationship was substantial: given the same park size and population density as well as other covariates, a park in a neighborhood with 30% poverty has approximately 30% fewer users than one in a neighborhood with 20% poverty. However the effect is attenuated when further accounting for “malleable” factors (e.g., staffing, facilities, organize/supervised activities, accessible/inaccessible areas). When the two parks above have the same levels in all malleable factors, the estimated difference in numbers of park users is reduced to approximately 18%. A typical park in the 3rd sample tertile of poverty level has differences that cannot be easily changed compared to a typical park in the 2nd tertile. A linear contrast between parks without accounting for fixed differences like size and facilities is estimated as 46% fewer users in the park of the 3rd poverty tertile. However, if all malleable factors like staffing and programming were equal, the difference in park users would be only 10%.

Findings of the survey data analysis suggest that parks in wealthier communities drew users from more distant places than parks in poorer neighborhoods. Across the three poverty tertiles (lowest to highest) the average distances park users traveled were .60, .48 and .33 miles. Park users in low-income neighborhoods, however, visited their parks more often, and users of parks in high income neighborhoods visited more sporadically. Both users and residents perceived parks in wealthy neighborhoods to be safer than users and residents in poorer neighborhoods. Staffing, especially more full-time staffing, was associated with the perception of a safer park, however, perception of safety was not associated with the number of facilities or the number of activities.

Conclusions
Neighborhood poverty level has a major association with park use and park-based physical activity In Southern California. Many potentially contributing factors cannot be changed easily, such as park size or the number of facilities, but several factors are remediable, including staffing patterns and programming. Reductions in disparities in park use between low- and high-poverty neighborhoods may require more programming and more staffing, the latter which may also contribute to improving perceptions of park safety. Future studies are needed to further confirm the generalizability of these findings beyond Southern California. Because our data are cross-sectional, experimental studies are needed to determine whether the changing the potentially remediable factors will increase physical activity in parks in high poverty neighborhoods.