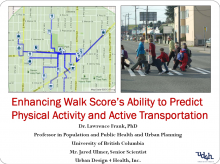 Background and Purpose
The purpose of the project was to validate the ability of the web-based tool Walk Score (www.walkscore.com) as a predictor of physical activity and reduced body weight. The project proceeded in two phases. The first phase tested the replacement of the straight-line distances that are used in the original Walk Score to measure the proximity of destinations to a home point with measures that account for street connectivity and barriers to walking. Phase 1 led to the development of Street Smart Walk Score (SSWS). The second phase of the project tested other enhancements to Walk Score’s scoring algorithm, including weighting of destination types and changes to its distance decay function.

Objectives
An empirically validated Walk Score can function as a low-cost and easily accessible tool to evaluate walkability and its health impacts, using data and methods that are consistent nationwide. With 6 million Walk Scores served up daily, the site is also a prime opportunity to make the connection between walkability and health highly visible.

Methods
Data on 2,199 adults in the Seattle and Baltimore regions from the Neighborhood Quality of Life (NQLS) project provided the outcome data for the analysis, as well as information on sociodemographic covariates such as age, race and gender. For each NQLS participant household, Walk Score provided the original Walk Score, the Street Smart Walk Score, and the components that made up the algorithm as the predictor (independent) variables for the analysis. In Phase 1, Original and Street Smart Walk Scores were compared to the Walkability Index used in the NQLS study. The Walkability Index is a composite measure of walkability based on GIS parcel data that has been empirically validated as a significant predictor of physical activity, body weight and other health related outcomes in at least 20 peer reviewed papers [Frank et al 2010; Frank et al 2006, Frank et al 2005]. In Phase 2, the following potential enhancements to SSWS were tested for their ability to predict moderate and vigorous physical activity (MVPA), body mass index and obese/overweight status, and transportation-related physical or sedentary activity:  1). Revision of the distance decay formula to better account for actual walking distances. 2). Adjusting destination weights to better favor the most likely walking destinations and to reduce the amount of “non-unique” information caused by the current high level of multicollinearity between Walk Score destinations. 3). Include the link:node ratio in the algorithm to account for street connectivity, rather than using the current intersection density and average block length penalties

Results
The analysis in Phase 1 found that a street network-based distance measurement method was more strongly associated with physical activity and body weight outcomes, and more closely correlated with the Walkability Index. These results led to the creation of an enhanced version of Walk Score called Street Smart Walk Score (SSWS). In Phase 2, each of the above enhancements significantly improved SSWS’s ability to predict health behaviors/outcomes such as moderate and vigorous physical activity (MVPA), body mass index and obese/overweight status, and transportation-related physical or sedentary activity.  For example, after implementing all these enhancements and predicting MVPA with SSWS in a regression model that adjusts for socioeconomic and demographic covariates, the p-value of the association of SSWS with MVPA decreased from 0.0054 to 0.00000025, the percent of the variance in MVPA explained by the SSWS increased from 4.9 percent to 14.4 percent, the expected change in MVPA for every one standard deviation increase in SSWS increased from 2 minutes to 3.55 minutes, and the model R2 increased marginally from 0.11 to 0.13.

Conclusions
Walk Score’s ability to predict active transportation and other related health outcomes can both be improved in the short term by adding the ability to account for street connectivity and barriers to walking, as well as changing specific components of the algorithm. Long term recommendations include: 1). Incorporate Transit Score in the SSWS algorithm (this will not be possible until more complete transit data is available, and/or more analysis can be completed in regions where transit data is missing). 2). Include additional variables in Walk Score that may be feasible to measure nationwide, such as population density, urban form (e.g. building height and lot coverage), traffic volume, pedestrian/cycling infrastructure, and topography.