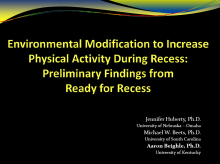 Background:
The Robert Wood Johnson Foundation suggests that what happens inside the classroom to help prepare children for success is of equal importance to what happens outside on the playground. Children between 1st and 6th grade, on average, spend more time per week in recess than PE or afterschool programs. PE time is often limited to 2-3 times a week and only 17% of youth in the United States participate in after school programs. Recess offers nearly half of the available opportunity to promote PA among children during the school year (42%), followed by PE (32%) and afterschool programming (26%). While recess is widely available, relatively little moderate-to-vigorous physical activity (MVPA) is accumulated during this time. Thus, with the limited opportunity that children have to achieve recommendations for MVPA during the school day and the lack of MVPA that accrues during recess, it is necessary to create a recess environment that maximizes MVPA participation, specifically among those children that tend to be the least active (girls and overweight/obese [OWOB] children).

Objectives:
The purpose of this study was to determine the effectiveness of Ready for Recess: an elementary school recess intervention targeting staff training (ST) and providing recreational equipment (EQ).

Methods:
Ready for Recess had four intervention schools: 1) EQ+ST, 2) EQ, 3) ST, and 4) control. ST and EQ+ST schools attended a training focused on motivating and promoting physical activity during recess. EQ schools simply received the equipment and were provided no direction in how to use the equipment. In addition, the EQ+ST school staff received an additional training, where they learned the use of the equipment and the activities that can be played with the equipment. Body Mass Index was assessed by research team members (trained by the principal investigator) using a digital scale (weight) and a stadiometer (height). MVPA was assessed with ActiGraph accelerometers (Actigraph GT1M) at the four schools in 257 3rd-6th grade children. Accelerometers were initialized to start at 7:30am and end at 4:00 pm on each monitoring day. Data was collected at three time points during the 2009/2010 school year. Baseline data was collected in September 2009 before implementation of Ready for Recess, mid-intervention in February, and post-intervention in April/May 2010. Random intercept models for OWOB and healthy weight (HW) for boys and girls separately examined change in percentage of time spent in MVPA during recess across EQ+ST, EQ, and ST compared to the control.

Conclusions:
These findings suggest the recess environment can be altered through simple strategies such as staff training and recreational equipment. Ready for Recess represents a possible means to increase MVPA in OWOB girls/boys, populations typically inactive during the school day and least likely to meet MVPA recommendations of 60 minutes/day. However, the effect of the intervention was not uniform across all subgroups, suggesting characteristics unique to each site may be influencing the treatment effect. A larger scale trial of Ready for Recess will provide further insight into its effectiveness.

Support:
Ready for Recess was supported by Active Living Research and the Robert Wood Johnson Foundation - Round 8.