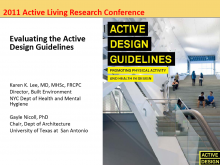 Background:
In response to the need to promote active design practices within the professions that create our built environment, the New York City Departments of Design and Construction (DDC), Health and Mental Hygiene, Transportation and City Planning, Mayor's Office of Management and Budget, working with the American Institute of Architects NY Chapter (AIANY) and academic institutions created the Active Design Guidelines (ADG). These guidelines, published in January 2010, are structured to provide both evidence-based and best practice strategies for the promotion of active environments in urban, site and building designs.

Objectives:
The objectives of this study are to determine: 1) knowledge, attitudes and self-reported practices regarding physical activity-promoting design among AIANY members and DDC staff before and after the release of the ADG; 2) baseline prevalence of ADG strategies in the designs of DDC projects prior to release of ADG; and 3) challenges and facilitators for project teams regarding incorporation of ADG strategies.

Methods:
Respectively for above:
1. Web surveys of AIANY members and DDC staff pre-ADG release in May-June 2009, followed by a post-release survey in May-June 2010;
2. An audit of 32 public sector building projects with designs completed between January 2006 and December 2008 that included new buildings and renovations of buildings originally built prior to 1970;
3. In-depth interviews with five DDC design teams composed of private and municipal architects undertaking three building-scale and two urban parks/plazas projects. (Of these, two buildings and one urban plaza have completed the design phase while the other building and urban plaza are just beginning the design phase.)

2) Audits of building designs: active design strategies found in building designs completed prior to the release of the ADG were as follows: buildings with grand stairs or open stairs (58%), buildings with placement of stairs closer to the entrance than the elevators (68%), number of stairs with windows (38%), floor area to stairs (8291 square feet per stair), and buildings with rooms for recreational exercise (29%). We also compared designs for the renovation of buildings built before 1970 with designs for new buildings and found a higher prevalence of some features, such as placing stairs closer to the entrance than elevators (85% of pre-1970 compared to 44% of new building designs, p<0.05).

3) In-depth interviews: The culture-based needs of a building’s occupants, the function-based needs of a client, and the design theory-based beliefs of a designer all appeared to make an impact on the successful incorporation of active design. While the ADG are generally well received as an idea, designers and their clients are not yet convinced of their potential cost-neutral status. Also, not all stakeholders believe in their effectiveness; rather, there was a perception that a large number of factors outside the built environment are impacting public health.

Conclusions:
Our research suggests that there are increases in perceived self-efficacy and self-reported intentional practices regarding active design four to five months after the launch of the ADG compared to before. Stairs appear to be more prominent than elevators in buildings built before 1970 compared to new buildings. There is room for public sector buildings, particularly new buildings, to increase stair-promoting designs. Additionally, since the majority of buildings audited do not have rooms for recreational exercise, there are also opportunities for improvement here, particularly as a way to increase access to physical activity for public sector employees. From case studies, active design implementation appears to be feasible in at least some settings. Adoption of active design practices by architects appears to be influenced by a client's functional needs and occupants' cultural needs as well as designers’ philosophy. Some stakeholders, however, remain skeptical of cost implications and of the impact the built environment can have on public health. Cost studies are needed for the former and outcome evaluation studies of projects could assist with the latter.

Support:
This study was funded by the Robert Wood Johnson Foundation through its national program Active Living Research.