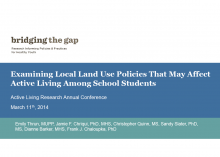 Background and Purpose
Policy makers and researchers have been examining ways to solve the youth obesity epidemic. One area of interest has focused on the adoption of local policies related to the built environment to promote physical activity.  The Task Force on Community Preventative Services recommends using community and street-scale design and land use policies to promote physical activity.1 Through its zoning and land development laws, a local government can regulate the location of park and recreation facilities, open space, trails, and other facilities that promote physical activity; regulate land use patterns (e.g. mixed use districts); and specify structural requirements such as sidewalks or bike lanes.

Objectives
This presentation will examine the extent to which youth reside in communities with local land development policies that address infrastructure-related features or improvements that would facilitate active living.

Methods
Data were compiled in 2011 from zoning ordinances and related policies obtained from 378 local governments (county, municipal, town/township) surrounding 154 secondary school catchments where a national sample of secondary school students were enrolled as part of the Bridging the Gap Community Obesity Measures Project (BTG-COMP).  Hard and electronic copies of the zoning codes and related policies for each jurisdiction were obtained and were independently reviewed and evaluated by trained policy analysts using the BTG-COMP Built Environment Local Zoning/Policy Audit Tool that seeks to assess the extent to which policies addressed active living. The Tool specifically captures the extent to which policies address any marker that would promote walking and biking (e.g., sidewalks), crosswalks, bike lanes, bike parking, trails/paths, mixed use, bike/pedestrian or street connectivity, active recreation (e.g. playgrounds, athletic fields, recreation facilities, etc.), passive recreation (e.g. open space, parks, etc.), and Complete Streets/Context Sensitive Design (CSD) policies.  The Tool also captures the strength and if applicable the type of use (permitted, conditional, accessory) related to each marker.

Each marker was weighted by the proportion of the youth (0-17) population in a given catchment area that resided in each jurisdiction sampled as a proxy for neighborhood school enrollment zones. Youth population estimates were derived from the American Community Survey 2007-2011 5-year file by multiplying each jurisdiction’s youth population density by the area in square miles that the jurisdiction overlapped its catchment. The proportion of the catchment youth population in a given jurisdiction was the resulting weight value. These measures were then aggregated to the catchment level. Thus, the weighted policy markers reflect the estimated proportion of the catchment’s youth population living in an area that addressed the active living markers of interest (e.g., bike lanes) as well as the strength and type of use variables. The catchment-level variables ranged from 0-1, with 0 meaning that no youth in the catchment were exposed to a given a policy provision and a score of 1 indicating that all of the youth in the catchment were exposed to a given policy. Data for this presentation were based on summary statistics examining the extent to which each of the active living policy markers were addressed and whether they were required and/or permitted uses.

Conclusions
Although many local governments include active-living oriented provisions in their land use policies, data from this study suggests that some provisions are more prevalent than others.  Policies were more likely to address items related to walking and biking, mixed use, and active and passive recreation than they were to address bike lanes or to contain Complete Streets or CSD provisions.

Implications for Practice and Policy
Local governments should review their existing land use policies and modify them to address infrastructure improvements or regulate land use patterns that could be to facilitate active living. Local governments should specifically require structural improvements, such as sidewalks or open space, to ensure active living opportunities.