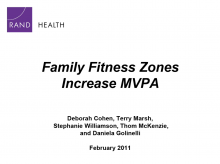 Background:
Many communities and organizations would like to improve community parks to increase physical activity, yet the impact of such improvements is seldom evaluated. Working under the leadership of The Trust for Public Land (TPL) and with funding from Kaiser Permanente, the Community Redevelopment Agency of Los Angeles installed 30 fitness zones throughout Los Angeles County. Fitness Zones are easy-to-use outdoor gyms designed to promote general health within a park setting by creating a supportive, accessible, structural, and social environment for getting physically fit. Fitness Zones consist of durable, weather- and vandal-resistant exercise equipment for strength training and aerobic exercise. The equipment needs no electricity and is appropriate for those 13 years and older of all fitness levels. We evaluated the impact of the Fitness Zone equipment in 6 county parks and 6 city parks that served a wide range of population groups. Within a 1-mile radius around the parks, the average percentage of households in poverty was 29.3% (range 6.8% to 61.5%); average population density was 40,964 persons (range 7581-72,292), percent Latino was 59% (range 19.1-97.3%) and percent African American was 18.9% (range 0.3-68.6%). Park size observed averaged 13.2 acres (range was 1-29).

Objectives:
Our objectives were to answer the following questions: 1) How well is the TPL fitness equipment used after installation? 2) Which age, gender, race/ethnic groups use it, how often do they use it, and do they use it correctly? 3) Do more people use the parks (including the Fitness Zones and other activity areas in the park), and are park users more physically active than to (1) before the equipment was installed and (2) in parks without Fitness Zone equipment.

Results:
Across three waves of observations, we counted 23,557 people in 12 parks, including 2,545 in the fitness zones; we also interviewed 2,637 people, including 722 in the fitness zones. Across the 12 parks, the Fitness Zone equipment was used throughout the day, with peaks from 9:30-11:30AM and 3:30-5:30PM. Six of the 12 parks experienced an increase in park use during the follow-up periods. The increases were concentrated in 4 city parks and 2 county parks, primarily those with a larger population density. Compared to baseline, overall park use increased 16% during the first follow-up and 3% during the second.

A greater percentage of parks users used fitness zone equipment (and the fitness zone) in smaller parks compared to larger parks. Fitness Zones attracted more new users (i.e., first time park use in the previous 6 months) to parks than other park areas. Fitness Zone users reported coming to the park more frequently and engaging in more exercise sessions per week than other park users. Losing weight was the most common reason reported for using the fitness equipment. Not all the equipment pieces/types were used equally; the dual pendulum and the ski machine were used most and the leg curl and horizontal bars the least.

People in Fitness Zones engaged in substantially more moderate to vigorous physical activity (MVPA) than those in other park activity areas (66% vs 31% at first follow-up and 72% vs 35% at the second follow-up). Additionally, the percentage of people engaging in moderate to vigorous physical activity (MVPA) increased, even in park areas excluding the fitness zone. For non-fitness zone users, compared to baseline, MVPA increased by 12% at the first follow up and 10% at the second follow up.

Conclusions:
Adding Fitness Zones appear to attract new park users and to increase the proportion of park users that engaged in MVPA, even in areas beyond the fitness zone. Overall, it appears that Fitness Zones had the greatest impact in parks in densely populated areas and in smaller parks that had few other facilities and amenities.

Support:
This study was supported in part by RWJF Active Living Research, NHLBI, TPL and the Kaiser Foundation.