How to Increase Bicycling for Daily Travel

How to Increase Bicycling for Daily Travel 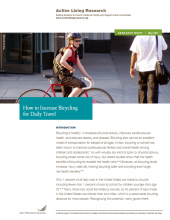 Make an impact: Recognizing this potential, many government agencies and public health organizations are starting to advocate for increasing bicycling as a way to improve people's health and reduce air pollution, carbon emissions, congestion, noise, traffic dangers, and other harmful effects of car use. Understanding the most effective strategies cities can use to increase bicycling is important.

What the findings are about: This brief summarizes the available evidence about strategies for increasing bicycling levels, including on-street bike lanes, off-street bike paths, and other bicycling infrastructure and educational programs, and offers related policy implications.