How Much Do Neighborhood Parks Contribute to Local Residents MVPA in the City of Los Angeles? A Meta-Analysis

How Much Do Neighborhood Parks Contribute to Local Residents MVPA in the City of Los Angeles? A Meta-Analysis 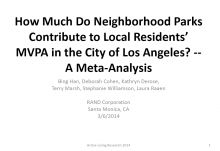 Background and Purpose
It is still largely unknown the extent to which local parks facilitate their local population’s moderate-to-vigorous physical activity (MVPA). As a result, it is unclear as to whether building new parks and facilities or further promoting the use of existing ones should be the higher priority in order to effectively address insufficient MVPA in the U.S. population.

Objectives
To quantify the contribution of Los Angeles City Parks to population-level MVPA.

Methods
We conducted a meta-analysis of park observation data as well as surveys of park users and local residents.  Data collected over 7 years from 4 studies and nearly 100 parks were included. We pooled the park observation and survey data and used a stochastic process model based on nonhomogeneous queue process.  To determine the contribution of parks to population-level MVPA, we compared the average amount of hours spent on MVPA in a neighborhood park to the total hours spent on MVPA by the local population using an age-gender stratified analysis of accelerometry data collected by NHANES.(1)

Results
The mean acreage of parks and recreation centers in Los Angeles is roughly 12 acres with an average of 2 sports fields and 8 facilities per park. The average population density within a one-mile radius is between 40,000-50,000 people. We estimate that, on average, 500 to 1,200 hours of vigorous PA (VPA) are accrued in a typical neighborhood park during one week; 1/4  to 1/3of these hours are accrued by female park users.  A park also supports on average 800 to 2,000 hours of moderate PA (MPA) during one week, where the proportion of time accrued by female users is slightly larger (300 to 1,000 hours).  In total, a park supports an average of 800 to 3,000 hours of MVPA during a week.  Another 2,800 to 6,000 hours of park use is spent in various sedentary behaviors such as sitting and socializing, which likely are associated with a modest proportion of MPA (e.g., walking to and from the parking lot).  The majority of MVPA and VPA in particular are accrued by children, teenagers, and non-elderly adults.  Estimates vary by park acreage, programming, number of facilities, local population density, and other factors. The estimated mean number of hours spent on MVPA in a single neighborhood park is roughly equivalent to the total number of MVPA hours that would have been accrued by 66-250 children and 150-600 adults if they fully adhered to national physical activity guidelines (6 hours for children and 2.5 hours for adults per week). However, since the actual number of hours spent on MVPA  is much lower than national guidelines, parks support a substantial proportion of the actual MVPA time for their local population.  NHANES data show that the average person engages in 1-4 minutes of VPA per day, thus we estimate that roughly 30 to 80 percent of the total hours spent on VPA by the population living within a half mile of the park is spent in parks.  On the other hand, roughly half of all park-supported MVPA is accrued by the local population living within a half mile of parks, a quarter is accrued by people living between a half and one mile of parks, and the remaining quarter is accrued by people living farther away than one mile.  The proportion of users from longer distances declines sharply as the poverty level of a park’s neighborhood increases. Self-reported data also suggest that parks are the most common place for exercise (i.e., vigorous activities) among the population they serve (park users and local residents).  Among the 60% of 17,000 respondents who reported engaging in some exercise, parks were the primary places for exercise for 40-60%, who also reported an average of roughly 130 minutes of vigorous physical activities per week, most of which were spent in parks. In contrast, we observed relatively few people doing MVPA at any time during any day in the average 12-acre neighborhood park (5-50 people).  Parks were even less used in low income neighborhoods compared to higher income neighborhoods, after accounting for size and other park facilities.

Conclusions
Self-reported MVPA data is subject to sizable self-report bias, due to the general tendency of over-reporting MVPA.   Nevertheless, there is a great potential to further improve parks’ contribution to people’s MVPA without affecting other social, recreational, and environmental purposes of parks.  Because the radius of influence of a neighborhood park is correlated with income level of the local neighborhood residents, it can be beneficial to build new parks in low-income areas.

Implications for Practice and Policy
Parks in high-income neighborhoods should focus their efforts to develop and promote programmed activities that support MVPA, while in low-income neighborhoods, more parks and facilities may be needed in addition to more vigorous marketing and MVPA promotion efforts.