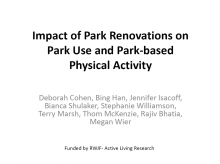 Background and Purpose
Rundown and dilapidated parks are less likely to attract users and may be areas for anti-social behaviors.  To make parks more attractive and increase physical activity among youth, many community based organizations and localities invest in renovations, often with the input of local residents so the parks can meet local needs. This study measured the impact of renovations to several urban parks in low-income neighborhoods in San Francisco.

Objectives
To determine  the impact of park renovations on park use and physical activity among park users, especially youths.

Methods
We systematically assessed park use before and after the park renovations using SOPARC, observing activity areas in 6 parks 4 times each day and 7 days of the week in May 2009 and May 2012. SOPARC assesses each area occupant by gender, age grouping, race/ethnicity, and physical activity level (sedentary, walking, vigorous). In each park during the same periods we also interviewed approximately 75 park users and 75 residents from randomly selected households within ½ mile of each park. Two parks underwent extensive renovations including the installation of completely new play equipment, new landscaping and ground surfaces, and one of these parks built a new recreation center and installed outdoor fitness equipment. Two parks were still undergoing renovations at the time of the follow-up and 2 other parks were completely unchanged from baseline (i.e., controls). Total park use was estimated by a mixed-effect (s)? model, in which we used a fixed effect to control for any park-level confounders and two random effects for observation times (i.e., hours of the day and days of the week) to account for the variations in use trajectories. Changes in use were estimated by a linear contrast between the two measurement periods. Using the same modeling approach, we also examined changes in park use by age group.Survey data were estimated by a set of logit models since survey outcomes are either binomial or Bernoulli random variables, where relevant respondent-level characteristics (e.g., age, gender, race, etc.) as well as the fixed-effect for parks were controlled.

Results
Use of the two renovated parks increased substantially compared to baseline. Use of the smallest park increased more than 5-fold, from an estimated 156 users to over 1,000 users per week. Use of the second renovated park increased from an estimated 5,500 users to more than 9300 users per week. The increase, however, was not uniform across age groups. Use by children and adults increased substantially, while there was no change in use by seniors and 51% decline in use by teens. The programming focus during the after-school period at least one of the two renovated parks shifted toward children, rather than for all ages, as was the case before renovations. In parks where there were no physical renovations or changes, general use declined. In one of these parks, the decline could partly be explained by reductions in accessibility, since the park’s hours of operation were restricted. No significant change in use was noted at the parks undergoing construction, in spite of several areas being inaccessible. The same patterns, but of a slightly different magnitude, were seen for changes in estimated energy expenditure (intensity of physical activity, METS) in the parks. For example, energy expenditure increased 7-fold from baseline in the smallest park, but it declined 50% in the parks with no structural changes. The self-reported survey data did not match observed findings entirely. Although park users and residents both reported using the renovated parks more frequently, residents living near parks that were not renovated also reported using them more often. Even though at baseline, most residents and park users considered their parks safe, park renovations were associated with an increased perception of park safety.

Conclusions
Park renovations can have dramatic effects on increasing park use and physical activity levels among park users and improve perceptions of park safety. In future projects, increasing park use by all age groups could be addressed by offering outreach and programming that target specific age groups (such as teens or seniors), and by building park features that appeal to them in areas or ways that will not adversely affect other park users.