Impact of Playworks on Play, Physical Activity, and Recess: Findings from a Randomized Controlled Trial

Impact of Playworks on Play, Physical Activity, and Recess: Findings from a Randomized Controlled Trial 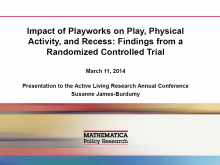 Background and Purpose
Recess has been reduced or eliminated in many schools across the U.S. and these declines have disproportionately affected low-income minority students in urban areas (Barros, Silver and Stein 2009). These findings are problematic, since research suggests that physical activity and structured play during recess may improve academic and behavioral outcomes in youth (CDC 2010). Playworks is a school-based program that places full-time coaches in low-income schools with high-minority populations to provide opportunities for organized play during recess. This current study evaluates the impact of Playworks on play, physical activity, and recess activities.

Objectives
In this presentation, we will present findings from a randomized controlled trial of Playworks. We will focus on outcomes that measure the impact of Playworks on play, physical activity, and recess collected from multiple data sources, including student surveys, teacher surveys, structured recess observations, and accelerometers. We will discuss the implications of the significant (and non-significant) impacts on increasing physical activity levels in minority youth populations.

Methods
Twenty-nine schools (17 treatment schools, 12 control schools) from six cities across the U.S. were recruited for a rigorous, random assignment evaluation of the Playworks program. Schools were grouped into blocks based on time-invariant, school-level characteristics and then randomly assigned to either the treatment condition (implementation of Playworks during the school year, either 2010-11 or 2011-12) or a control condition (delayed implementation of Playworks until after the study). Data were collected in spring 2011 and 2012 to document the implementation and impact of Playworks on key outcomes related to play, physical activity, and recess. A brief description of the data sources and sample sizes are as follows:

Conclusions
We found some evidence that Playworks has a positive impact on play, physical activity, and recess. However, we also found no significant differences between treatment and control schools based on some outcome measures.

Implications for Practice and Policy
Educators, especially those in schools and districts located in low-income, high minority areas, should consider the benefits of recess and, more specifically, the benefits of Playworks in increasing students’ physical activity.

Support / Funding Source
This project was funded by a grant from the Robert Wood Johnson Foundation.