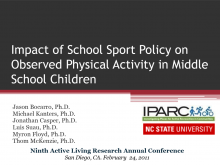 Objectives:
This study addressed two objectives: (1) compare physical activity levels of middle school children engaged in two different types of sport programs (Intramural [IM] or Varsity sports [VS]); and (2) examine associations between physical activity and gender, level of program supervision, and other selected program characteristics by type of sport program (IM or VS).

Methods:
Data were obtained from direct observations in 4 schools (2 IM and 2 VS). Between January 2009 and December 2009 1,188 observations (661 VS scans; 527 IM scans) were conducted by trained assessors using the System for Observing Play and Leisure in Youth (SOPLAY). Physical activity levels were recorded in predetermined zones designated for school sports between 2:30-5:00PM during the different school sports seasons. Primary SOPLAY codes accounted for student gender and activity level (sedentary, walking, and vigorous), type of play and level of adult supervision (no, limited, or full supervision). Inter-rater reliability for SOPLAY codes was acceptable (kappa > 0.70). Multinomial logistic regression was used to examine associations between physical activity and the predictor variables. To examine for differences of school policies, separate models were estimated for IM and VM programs.

Conclusions:
Although data was limited to 4 schools in one geographic region, this study was one of the first to objectively measure the impact of sport policies on adolescent’s physical activity levels. These data show that school sport settings are under-utilized and that school sport policies may impact opportunities for vigorous activity levels among children. Sixty-eight percent of designated sport areas were not being used when observed. The study also showed that intramural sport programs may not be providing as much physical activity opportunities for girls. Finally, supervision was associated with increased activity in intramural sport programs but was negatively associated with varsity sports. Policy measures suggested by our data include: (1) increasing joint programming/joint use of school facilities where there is “excess capacity”; (2) examine the type of adult supervision that occurs during sport to maximize physical activity levels; (3) adopting intramural programming that is more likely to facilitate activity among girls (e.g., sports exclusively for girls and more student involvement in the selection of intramural sports); (4) monitoring time spent in actual activity during sport program and establishing minimum standards; and (5) a 'full' implementation of an intramural program would likely increase physical activity.