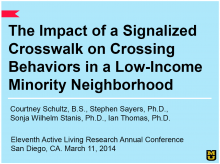 Background and Purpose
Communities with predominantly low-income and minority populations are effected by the highest levels of sedentary behavior and obesity (Day, 2006). These underserved communities often have limited access to parks and active transportation resultant of high-speed, high-volume streets and an outdated built environment. While studies suggest that sidewalks, crosswalks, and traffic calming measures can increase pedestrian safety (Pucher & Dijkstra, 2003) few studies have evaluated pedestrian crossing behaviors as a result of infrastructure changes. In 2012-2013, the completion of a signalized crosswalk and landscaped median linking low-income housing with a public park provided a natural experiment to examine the effect of an infrastructure project upon active living behaviors.

Objectives
The purpose of this study was to examine the effect of changes to the built environment to determine whether street crossing infrastructure modifications change pedestrian crossing behaviors or traffic patterns in a low-income and predominately racial/ethnic minority community.

Methods
Data collection occurred at one Intervention site (Providence Road) and one Control site (College Avenue) in Columbia, MO. We selected the Control site by examining relevant characteristics of the neighborhood (e.g., size, income level), and the corresponding street (e.g., number of lanes, typical traffic volumes/speeds, pedestrian crossing facilities). Street crossing behaviors were collected using direct observation and assessed the mode of transportation, legality of the crossing (e.g., at intersections/crosswalks or not), as well as race/ethnicity, gender, and age within 5-6 zones at both sites. Magnetic traffic detectors were also embedded in both the Intervention and Control streets during the data collection to capture traffic volume and speed. Data collection ran concurrently at both sites for seven days (Monday-Sunday) over the same two-week period in June 2012 (pre-intervention) and June 2013 (post-intervention), crossing behaviors were recorded for three hours each day (7:30am, 12:30pm, and 3:30pm) while traffic data were collected continuously for 168 hours during the first week.

Descriptive statistics were calculated for all variables. Independent samples t-tests assessed overall changes in pedestrian crossings and traffic volume at each site from 2012 to 2013. Changes in legal/illegal crossings and traffic speed (above the speed limit/below the speed limit) at each site from 2012 to 2013 were analyzed using Pearson’s Chi Square.

Conclusions
The replacement of an unsafe pedestrian bridge with an at-grade, signalized pedestrian crosswalk and landscaped median significantly impacted both pedestrian crossing behaviors and vehicular traffic behaviors. Specifically, the installation of the pedestrian crosswalk yielded reduced proportions of illegal crossings (especially among children), and reduced the percentage of vehicles speeding on the highway through the neighborhood at the Intervention site while the percentage of vehicles speeding at the Control site increased. This study suggests that street crossing infrastructure changes do change behavior, which will help inform future street crossing interventions and may be used to guide policies promoting physical activity in similar communities where high-speed arterials are barriers to parks and active living.

Implications for Practice and Policy
By demonstrating increased pedestrian safety and traffic calming, this study adds support to the feasibility of advocacy efforts to reverse transportation practices that favor automobiles at the expense of pedestrian accessibility. These successful outcomes could be used to support advocacy efforts seeking to modify the built environment to increase physical activity in underserved neighborhoods.