The Impact of State Laws and District Policies on Physical Education and Recess Practices in a Nationally-Representative Sample of U.S. Public Elementary Schools

The Impact of State Laws and District Policies on Physical Education and Recess Practices in a Nationally-Representative Sample of U.S. Public Elementary Schools 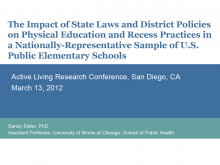 Background
Children spend the majority of their waking hours in school, thus schools are important locations to focus obesity prevention activities, such as increasing physical activity (PA) opportunities. While only a few studies have examined the impact that state-level policies have on the amount of time allocated to Physical Education (PE) and/or PA during the school day, all show an increase in the number of weekly PE minutes after the passage of a state law. However, implementation of state policy varied across the affected school districts and some schools cited competing time demands as a barrier to full implementation. A limitation of these recent studies was that they examined individual states, did not account for additional policies at the school district level, and only focused on PE and/or PA without examining recess-related policies.

Objective
We build on existing evidence by examining the impact of state and school district-level policies on the prevalence of PE and recess in a nationally representative sample of U.S. public elementary schools; this is the first study to do this.

Methods
Analyses from annual, nationally representative, cross-sectional surveys of School Administrators in the United States. Data were collected with mail-back school surveys conducted during the 2006-07, 2007-08, and 2008-09 school years, primarily between February and June of each school year. State laws and district policies were compiled annually by researchers in the Bridging the Gap program using established legal research techniques. The sample size was 47 states, 690 districts, and 1761 schools. Twenty minutes of daily recess and 150 minutes of PE weekly are the primary outcome measures.

PE Results
The odds of schools meeting the NASPE recommendation of 150 weekly minutes of PE increased if they were located in states or school districts having a law or a policy requiring 150 minutes of PE weekly. Schools meeting the NASPE recommendation for recess were significantly less likely to meet the PE criterion (OR 0.5, 95% CI: 0.4, 0.7). Schools reporting PE not being a school priority were significantly less likely to have 150 minutes of weekly PE.

Recess Results
Several variables emerged as significant predictors of schools meeting the nationally-recommended criterion of offering at least 20 minutes of daily recess. Schools located in states with policies encouraging daily recess had higher odds of having 20 minutes of recess daily (OR 1.8, 95% CI: 1.2, 2.8). District policies were not significantly associated with school-level recess practices. Adequate PE time was inversely associated with recess, with schools meeting the NASPE recommendations of at least 150 minutes of PE weekly being 50% less likely to meet the recess criterion. The odds of schools meeting the recess criterion were lower (OR: 0.2, 95% CI: 0.1, 0.3) if the survey respondent reported competing time demands as a barrier.  Predominantly Caucasian schools were more likely than all other racial/ethnic groups to have daily recess. Schools with the highest number of students receiving FRL were less likely to have 20 minutes of recess daily (OR 0.50, 95% CI: 0.3, 0.7). Finally, having a longer school day was positively associated with meeting the NASPE standards for both PE and recess.

Conclusions
To our knowledge this is the first study to examine nationally the impact of state and district-level policies on public elementary school PE and recess time practices. Given the amount of time youth spend in school and the importance of PA, our study provides important information for policy makers. Our results show that mandating only increased PE or recess time does not result in more overall PA as schools/districts appear to compensate for any increased PA in one area by decreasing other PA opportunities. In order to increase school-based PA policy makers may need to mandate more of both PE and recess time.