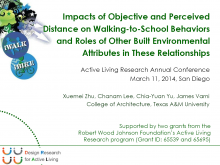 Background and Purpose
Walking to school is being promoted as a sustainable and healthy mode of school transportation. Relevant studies have identified distance as the most important barrier, which was captured through either objective (e.g., Geographic Information Systems [GIS]) or subjective measures (e.g., parental report). Perception of distance may be influenced by not only the objective distance but also other built environmental attributes such as pedestrian infrastructure, road characteristics (e.g., traffic volume and speed), safety, and visual quality. Discrepancies have been reported between the objective and perceived distance for general walking behaviors. However, to our knowledge, no previous studies on walking to school have included both objective and perceived distance measures in their analyses. Consideration of both measures can facilitate the understanding of the complex factors influencing walking-to-school behaviors. Relevant results can inform school and community development, as well as promotion of walking-to-school behaviors.

Objectives
This study examined the direct role of objective distance and the mediating role of perceived distance on walking-to/from-school behaviors among elementary school children. It also explored how other built environmental attributes influenced walking to/from school directly and indirectly (through influencing perceived distance).

Methods
The data came from a parental survey of 6,383 elementary school children in 22 diverse neighborhoods in Austin, Texas. It includes information on students’ school travel modes, personal and social factors, and home-to-school travel environment. Perceived distance was captured as a binary variable by asking parents whether they considered the distance to be close enough for their child to walk to school. GIS was used to geocode students’ homes and schools, and to calculate the objective home-to-school distance based on the shortest route. Structural equation models (SEM) were estimated to predict walking to/from school using personal, social, and built environmental factors, including both direct and indirect impacts of distance and other built environmental characteristics.

Results
Among personal and social factors, parental education, car ownership, and availability of school bus service were negative correlates of walking to/from school, while the number of children in household was a positive correlate. For physical environmental factors, perceived distance was a significant mediator between objective distance and walking to/from school. After including perceived distance in the model, the objective distance no longer had a significant direct impact. Instead, it showed an indirect impact, by influencing the perceived distance, which in turn influenced walking to/from school. Perceived distance was influenced by not only the objective distance, but also other built environmental factors, including (1) sidewalk availability and quality, (2) overall walkability (a latent factor captured by convenience of walking to school, maintenance, tree shade, quietness, nice things to see, street lighting, and school zone enforcement), and (3) presence of certain land uses and facilities (busy roads, parks/playgrounds, convenience stores, bakery/café/restaurant, and bus stops) en route to school. Some of these environmental factors (sidewalk availability and quality, overall walkability, and presence of parks/playgrounds and bus stops) did not show direct impacts on walking to/from school, despite their indirect impacts.

Implications for Practice and Policy
Although distance is the strongest barrier to walking to school, shortening home-to-school distance is going to take long-term efforts in school planning and community development. Meanwhile, improving other aspects of built environments such as pedestrian infrastructure and overall walkability can be more immediate strategies, and may help increase the distance threshold perceived as walkable.

Support / Funding Source
This project is supported by a grant from the Robert Wood Johnson Foundation Active Living Research Program.