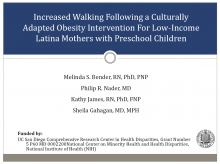 Studies have shown that normal weight children are more physically active than obese children. However, in low-income neighborhoods, environmental factors, such as limited safe walking routes and few facilities promoting physical activity, are barriers to participation in physical activities. Policies and interventions to overcome these environmental limitations are important. Finally, role modeling by parents plays an important function in influencing health behaviors in their young children. Studies report interventions directed to parents are effective in improving health behaviors of their children. For example, physically active parents tend to have physically active children.

Objectives
We designed a study to assess the feasibility of a culturally adapted obesity intervention for low-income Latino mothers with preschool children. The aims were to increase walking in mothers, enhance their self-perception as role models for their children; and change maternal beliefs, knowledge, and self-efficacy regarding physical activity.

Methods
We designed a 9-month culturally adapted obesity intervention facilitated by a promotora for low-income Latina mothers of preschool children. The intervention was linguistically and culturally tailored for this community using a community-engagement approach with input from community stakeholders, focus groups, a pilot test of survey instruments and ongoing feedback from the promotores and participants.

We enrolled 33 Spanish-speaking low-income Latino mother-child dyads from a Southern California community health center. The mothers were 18- to 35-years old with 3- to 5-year old children. Over a 9-month period, with three groups of 11 mother-child dyads, a promotora delivered four lessons to introduce the physical activity concepts, and led six community activities (e.g., field trips to local parks and trial walks) to introduce safe walking routes and reinforce the desired health behaviors. Mothers were asked to walk at least 30 minutes a day, as role models, and encourage their young children to be physically active by walking with them. Mothers were provided pedometers to measure their walking steps.

We report on behavior change over the 9 months and on a 6-month post-program follow-up. Using a one-group, pre-test post-test design, we assessed changes in mothers’ step counts and maternal health beliefs, knowledge, and self- efficacy regarding nutrition and physical activity. Applying a matched pairs t-test, a Wilcoxon signed ranks test and chi-square test, we determined the pre- to post- program differences in the target health behaviors.

Results
All mothers were Mexican - most with four or less years of education and living at or below the poverty level. After 9 months, maternal pedometer counts had increased by 59% to 20,181 steps, (p < .01). By 9 months, mothers’: beliefs about walking became more positive, knowledge about healthy behaviors increased, and self-efficacy for role modeling healthy behaviors improved.

At 6-months post-program, maternal pedometer counts decreased by 60% to 12,181 steps, (p < .01). However, positive maternal beliefs about walking, knowledge about physical activity and improved self-efficacy regarding role modeling healthy behaviors were sustained. We note that at the 6-months post-program follow-up, three pedometers had been lost and all other pedometers needed battery replacement.

Conclusions
These preliminary findings suggest a culturally and linguistically tailored 9-month intervention program was effective in increasing maternal walking, improving maternal belief and knowledge about walking, and self-efficacy for role modeling walking for their children. We believe that increased knowledge, skills, and attitudes were important in facilitating behavior change. In addition, pedometers were an important tool for self-monitoring and comparison with the other mothers.

It is clear that a maintenance phase was needed to promote long-term healthy behavior change. Even though the participants loved the pedometers, they did not replace broken units or dead batteries post study. We understand that there were financial constraints. We also suspect that monitoring and reporting to the promotora were important contributors to the efficacy of this intervention and would need to be included in a maintenance phase. Future work should assess long-term adherence to these important health behavior changes, their ongoing influence on maternal and child BMI, and changes in children’s physical activity.