Learning from the Economists: Using an Elasticity Analysis to Assess Changes in Screen-time in Response to a Temporary Pop-up Park in California

Learning from the Economists: Using an Elasticity Analysis to Assess Changes in Screen-time in Response to a Temporary Pop-up Park in California 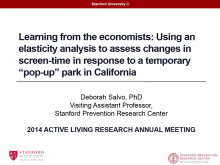 Background and Purpose
Screen-time is a common proxy measure for sedentary behavior, which is a risk factor for certain chronic diseases independent of moderate-to-vigorous physical activity (1,2). Park use and park exposure have been positively associated with leisure-time physical activity (3), but few studies have documented the relationship between park availability and screen-time (4).  Cross-elasticity is a common measure in economic research to report the change in demand of an item given an increase in price of another item. In active living research elasticity analysis can been used to understand changes in time-allocation patterns in relation to built environmental changes (5). Natural experiments have been identified as a research priority to understand the causal relationship between built environment features (like park availability) and changes in health behaviors. During the summer of 2013, we took advantage of a natural intervention involving a temporary modification of the urban landscape of downtown Los Altos, California (28,976 inhabitants), where a main street block was closed due to construction and transformed into a temporary park. During this time, we conducted a study to examine the relationship of park exposure with time allocated to screen time and other activities.

Methods
Researchers from the Stanford Prevention Research Center designed and conducted an intercept survey for users of the temporary street park of downtown Los Altos. Surveys were administered during a four day period, including two week days and two weekend days. Survey respondents reported the amount of time that they intended to spend at the park that day, as well as the type of activity they would regularly be doing during that time if the temporary street park were not available (i.e., alternate activities).  Alternate activities were coded as the following binary variables: screen-time vs. non screen-time, spending time in a park vs. spending time elsewhere, spending time in downtown Los Altos vs. spending time elsewhere, and spending time outdoors vs. spending time indoors. Prevalence was estimated per category.  To obtain cross-elasticity estimates, we ran multivariate linear regression models using minutes of screen-time, minutes of total park use, minutes of outdoor time, and minutes spent in downtown Los Altos as the dependent variables; park availability was used as the independent (exposure) variable. All models controlled for effects of sex and age. The regression coefficients for the effect of park availability represented the number of minutes gained or lost per alternate activity due to park presence.

Results
A total of 147 park-users were surveyed. Of the sample, 62.5% were female, 5.5% were children, 6.8% were adolescents, 66.7% were adults and 20.4% were seniors.  Among survey respondents, 15.0% reported that if the temporary park was not available they would be spending that time in front of a screen. Meanwhile, 64.6% would regularly be at an indoor location at time of survey, 40.8% would be spending time in downtown Los Altos regardless of temporary park availability, and 15.7% would be spending time at another park. The elasticity analysis revealed that among survey respondents, the presence of the temporary park was associated with 77.4 fewer minutes of screen-time, 72 additional minutes of time spent at a park, 88.6 additional minutes of time spent in downtown Los Altos, and 76.1 additional minutes of outdoor-time.

Conclusions
Our results indicate that the presence of a temporary 1-block street park located in the heart of the downtown shopping district of Los Altos, California was associated with positive changes in time-allocation patterns, including a significant reduction in screen-time and a significant increase in time spent in a park. Larger studies are needed to estimate the elasticities of time-allocation in relation to the availability of public spaces, such as parks, to verify our findings. Future studies should also take place in locations where environmental changes are intended to be long-term/permanent.

Implications for Practice and Policy
This study provides valuable evidence supporting the creation of parks and open spaces in high land-use mix urban areas. Our findings (more time spent in downtown Los Altos due to park availability) also suggest that the presence of public recreation spaces may have benefits beyond health behaviors, and may also contribute towards the revitalization of downtown shopping districts in small cities. These potential benefits should be further explored, as they may be more likely to influence the decisions of stakeholders for the creation of parks than health-related benefits.