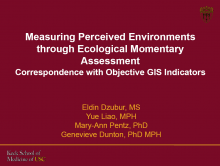 Background and Purpose
Perceived neighborhood traffic and greenness are important variables that have been examined in prior research correlating the built environment with health-related behaviors such as walking and exercise. In general, vehicular traffic presents hazards to pedestrians that limit participation in physical activity and has been associated with poorer health in adults and children. Neighborhood greenness improves perceived aesthetics and access to natural shade encouraging individuals to engage in physical activity and subsequently better overall health in the population. Studies typically use retrospective survey methods to measure subjective perceptions of the neighborhood environment (e.g., Neighborhood Environment Walkability Survey [NEWS]). However, this approach may be prone to recall biases, condense perceptions of multiple micro settings into one overall neighborhood rating, and take into account parts of the neighborhood that are never or not regularly encountered. Ecological momentary assessment (EMA) provides an alternate way to measure the perceived environment by collecting real-time assessments of one’s immediate setting on mobile devices. However, an important first step to using EMA measures of the perceived environment is to examine the extent to which they correspond to objective measures of the built environment such as Geographic Information System (GIS) indicators

Objectives
The primary purpose of this study was to assess the convergent construct validity of EMA self-report of perceived traffic and greenness. To address this objective, the study analyzed EMA items measuring adults’ perceptions of nearby traffic, greenery, and shade. These items were compared respectively to objective measures of traffic (all vehicular collisions) and greenness (Normalized Difference Vegetation Index) near each participant’s place of residence.

Methods
The study sampled adults from the first two waves of data from an ongoing study investigating the effects of environmental and interpersonal factors on health behavior decision-making. The participants carried mobile devices (HTC Shadow) with a custom EMA application that prompted for surveys eight times a day for a period of four days per wave. Each wave was separated by six months. Participants were asked a random subset of questions from a larger survey in order to limit time spent taking the short assessment. One item rated the perceived level of traffic (“How much TRAFFIC is on the closest street to where you are right now?”) and two items rated the perceived level of greenery (“How many TREES AND PLANTS are there in the area where you are right now?” and “How much SHADE FROM THE SUN is there in the area where you are standing right now?). Using ArcGIS, a 3000 meter street network buffer was created around each subject’s place of residence to measure NDVI in 20XX and all collisions after the year 2006. Three multilevel regressions examined the validity of EMA-reported perceived traffic against GIS-derived vehicular collisions, EMA-reported perceived greenness variable against GIS-derived NDVI, and EMA-reported perceived shade variable against GIS-derived NDVI. Time (wave) was treated as a covariate in each equation.

Conclusions
Results from this study provide initial evidence of the construct validity of EMA-reported perceptions of neighborhood traffic and greenness. EMA-reported perceived greenness (i.e., trees or plants) corresponded with an objective measure of greenness (NDVI). Likewise, the EMA-reported variable for perceived traffic was validated against an object measure of traffic (i.e., vehicular collisions). The findings are consistent with prior research in children validating the EMA-reported variables against parent-reported retrospective traffic and aesthetics on the NEWS. However, there was only partial validation of the EMA-reported variable for shade against objective greenness. One explanation for this could be vagueness of the question. While shade from the sun often refers to trees and other natural shrubbery, there are many situations where shade could come from tents, tall buildings (such as during sunset or sunrise), or other manmade structures (e.g. parking garages). These findings offer support for the construct validity of EMA items measuring perceived greenness and traffic and suggest that the EMA-reported item measuring shade may not be necessary when attempting to measure greenness, although future studies could validate the shade measure against a real-time UV monitor.

Implications for Practice and Policy
By showing construct validity, these findings allow future practice and policy research to utilize EMA measures for perceived greenness and traffic, thereby eliminating major hurdles such as recall bias.  New studies will be able to show more conclusive findings on greenness and traffic by correlating perceived micro settings with health behaviors.