Moving Forward: An Assessment of Safe Routes to School Programs in Five States

Moving Forward: An Assessment of Safe Routes to School Programs in Five States 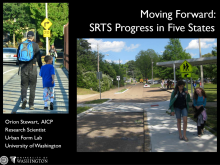 Background and Purpose
Safe Route to School (SRTS) programs are designed to enable more children to safely walk, bicycle or use other modes of active travel to school (ATS). Children that use ATS receive more physical activity than those who do not and may contribute to reduced congestion and improved air quality around their schools. to help realize these benefits, the 2005 federal transportation bill, SAFETEA-LU, established a SRTS program in each state. State SRTS programs provide grants to projects in school-based communities that directly support walking and bicycling through engineering, education, encouragement, and/or enforcement activities. The program has been widely popular. Across all states, SRTS grant applicants have requested about 2.5 times the amount of SRTS funding available. Despite high demand for this short-lived program, dedicated federal funding for the SRTS program has been eliminated with the passage of the 2012 federal transportation bill, MAP-21. However, assessments of the seven-year federal program are just now being made, which should help Congress re-evaluate the value of the program for the installment of the next federal bill. These assessments should also benefit State policymakers who must now determine if the SRTS program is worth the investment of scarce pedestrian and bicycle transportation funds. in those states that do continue their program, SRTS Coordinators will need to know how to choose the SRTS project applications with the greatest potential for success.

Description
This study is one of the results of a five-year collaborative effort on the part of six state SRTS coordinators (from AL, FL, MS, TX, WI, and WA). Its aims are to (1) quantify the impact of the state SRTS programs, (2) assess changes in rates of ATS after the implementation of a SRTS project, and (3) identify characteristics of SRTS projects that were associated with greater increases in rates of ATS.

Lessons Learned
Using information provided by state SRTS coordinators and obtained from publicly accessible databases, including those maintained by the U.S. Census Bureau and the National Center for Education Statistics, this study developed a database of all SRTS projects, schools, and school neighborhood characteristics in five of the six study states. Descriptive statistics were used to quantify the impact of the programs in the five states. Projects were assessed on rates of change in ATS, which were calculated and tested for statistical significance using paired samples t-tests. to identify characteristics of more successful SRTS projects, bivariate analysis was used to identify SRTS project, school, and school neighborhood characteristics associated with greater increases in rates of ATS.

Conclusions and Implications
in the five states, almost $157 million had been awarded to 569 SRTS projects that affected more than 1,410 schools with an estimated enrollment of 781,180 children – roughly 10% of the PK-8 grade public elementary school population in the five states. Due in part to the lack of federal requirements for data collection and to the length of time it takes for projects to come to completion, changes in rates of ATS were only available for 48 projects in four of the study states. These projects tended to be focused on fewer schools and smaller student populations and included a more comprehensive range of interventions; all featured an engineering intervention. Among these completed projects walking increased by 45% (from 9.8% to 14.2%), bicycling increased by 24% (from 2.5% to 3.0%), and all ATS increased by 37% (from 12.9% to 17.6%). Increases were statistically significant.SRTS projects that affected fewer schools and students, and those with encouragement and education components tended to have greater increases in rates of ATS. These relationships, however, were not statistically significant. No relationships were found between school and school neighborhood measures of socio-economic status and project performance. The single statistically significant relationship found was a negative correlation between baseline rates of bicycling to school and increases in rates of bicycling to school, suggesting that SRTS projects may be effective at introducing bicycling as a viable mode of travel to school where few children already do so.

Next Steps
This study offers preliminary evidence that state SRTS programs are achieving one of their primary goals of increasing rates of walking and bicycling to school and that federal SRTS funds are delivering an immediate return on investment. Encouragement and education interventions paired with pedestrian infrastructure improvements appear to be a particularly effective way of immediately increasing ATS. SRTS projects may also be a particularly effective means of introducing bicycling to communities where it is rare. The research framework established here can be used by researchers and SRTS coordinators alike to continue to track the effect of state SRTS programs as more projects are completed and more data become available.

Support / Funding Source
This research was conducted as part of a Transportation Pooled Fund study sponsored by the Washington State DOT. Other contributing state DOTs include Alaska, Florida, Mississippi, Texas, and Wisconsin.