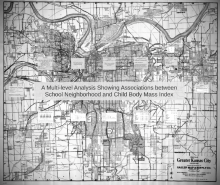 An animated version of this presentation can be viewed here.

Background and Purpose
Environmental effects on child health, including obesity, are well established. Studies examining associations between schools and child health largely have focused on the immediate school environment (e.g., cafeteria, schoolyard). Accordingly, Harrison and Jones, call for conceptualizing school environments more broadly. In particular, they propose a multi-tiered model that includes the infrastructure of schools themselves, but also surrounding neighborhoods, since even children not residing in those areas nonetheless regularly traverse them.  Most importantly, if the areas surrounding schools have significant influence on student health, they may represent anchors around which to more efficiently deploy resources for environmental improvements. Additionally, inconclusive findings from previous studies, most examining food environments, warrant additional study of school neighborhoods.

With a large sample (n=12,118) of racial/ethnically diverse elementary school children, this study used hierarchical linear modeling to estimate the associations between objective assessments of low-income urban school neighborhoods and measured BMI expressed as BMI percentile. Of critical importance, this study accounted for individual-level factors such as race, gender, and age, to more robustly estimate the effects of park or fast-food density, population change, and other community-level health indicators.

Objectives
To examine associations between environmental aspects of neighborhoods surrounding schools and childhood body mass index percentile (BMIp) using a sophisticated hierarchical design to improve the validity of the results.

Methods
Health data were collected from elementary students as part of a non-profit program offering health screenings, education, and referrals.  Data at the community/neighborhood level was collected from various databases including the U.S. Census and the Walkscore website.  The student data used in this analysis was collected in the 2008-2009 academic year and contained 46 different schools falling in 25 unique zip codes. The distribution across grade levels was relatively even, ranging from 2,123 students in the kindergarten cohort (17.5%) to 1,894 in the fifth grade cohort (15.6%).  The schools were heavily minority (41.76% black, 33.28% Hispanic, 21.89% white, and 3.07% other), with 49.07% female and 50.93% male.

Our data have a two-level hierarchical structure where individuals are nested within school/neighborhood. Specifying the model in this way is important because ignoring the clustering effect can lead to false positives in hypothesis testing, something that calls into question some previous work in this area. We used HLM, which takes into consideration the intraclass correlation between individuals within the same cluster and adjusts for its effect accordingly. Therefore, it produces more appropriate significance tests while simultaneously examining the effects of variables at both individual and group levels.

Results
While race, age, and sex remained predictive, the presence of parks and fitness facilities were associated with additional reductions in BMI percentile.  Similarly, the number of fast food restaurants predicts higher BMI percentile, as do declining populations, which likely signal urban decay of some sort.  More complex relationships manifest among some other community-level variables in the models.  While many call for increased access to grocery stores, particularly in efforts to assist “food deserts,” our analysis shows that access does not necessarily promote health, at least among children.  That is, the positive relationship between grocery stores and BMI percentile among children illustrates the need for changing not only access to them, but also likely the types of foods they offer and ultimately the food choices of the consumers who use them. The latter would presumably focus on parents. Similarly, convenience stores often are regarded as having a preponderance of unhealthy food choices.  That they manifest in our analysis as health promoting likely has less to do with the convenience stores themselves, and more to do with the density of retail and shopping in areas, which have been show to promote physical activity (mainly walking) resources. This is additionally evidenced by the effect of population size itself, where higher population densities may correspond to greater numbers of destinations within neighborhoods.

Differential estimates of BMI percentile among children based on the results of Model 2 are particularly illuminating.  Using the values from our data, the predicted BMI percentile at age 10 by race/ethnicity and sex shows a 15- point drop in BMI percentile for “obesogenic” vs. “non-obesogenic” neighborhoods.

Conclusions
This paper demonstrates that aspects of the environment in the neighborhoods surrounding schools indeed are associated with childhood BMI percentile, pointing to the fact that they should be regarded as significant zones of health influence for children.

Implications for Practice and Policy
Where redevelopment efforts have previously focused on classically defined neighborhood boundaries, our study suggests that neighborhood redevelopment efforts by HUD and other non-profits (e.g. Local Initiative Support Corporation) should consider targeting the radial areas around schools, rather than traditionally defined neighborhoods.  This is particularly important because improved child health manifests healthier adults later on.  While traditional neighborhood boundaries will capture a cross-section of the public, the number of children affected by improvements to school neighborhoods ultimately may pay greater health dividends, and the full range of corollary benefits, as they age.