Neighborhood Design and Health: Characteristics of the Built Environment and Health Related Outcomes for Residents of Detroit Neighborhoods

Neighborhood Design and Health: Characteristics of the Built Environment and Health Related Outcomes for Residents of Detroit Neighborhoods 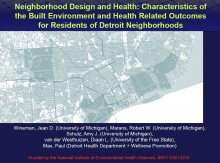 Background
Obesity and associated health risks (cardiovascular disease, diabetes, dietary cancers, and stroke) in the American population have risen dramatically during the past quarter century. It has become clear that there is a need to create ‘healthy’ built environments - neighborhoods that are conducive to walking and other physical activities. To address these goals the Healthy Environments Partnership’s Lean & Green in Motown (LGM) project brings together an interdisciplinary a team of researchers from the University of Michigan (UM) School of Public Health, UM Taubman College of Architecture + Urban Planning, University of Chicago at Illinois, Detroit Department of Health and Wellness Promotion, Brightmoor Community Center, Detroit Hispanic Development Corporation, Friends of Parkside, Henry Ford Health System and Warren Conner Development Coalition.

Objectives
One of the aims of this project is to explore the interrelationships between characteristics of the built environment, physical activity, and health measures of residents in three Detroit neighborhoods: referred to as Eastside, Northwest and Southwest. In this paper, we use measures of density and land use mix, as well as measures of street network characteristics (local connectivity and global integration), and examine their associations with localized physical activity.

Methods
Street network characteristics (integration and connectivity) were derived using computer-based space syntax methods applied to the GIS dataset of resident address locations. Data were also collected on ¼ mile and ½ mile housing unit density, land use mix (Entropy Score), and neighborhood typologies based upon categorical measures of density and land use. These measures are then examined in relationship to reported localized physical activity (both leisure and transportation-related walking), controlling for socio-demographic status and other factors.

Physical activity and other health outcomes were measured using data from the 2008 Healthy Environments Partnership (HEP) survey. The HEP survey is one component of a community-based participatory research study involving academic, health care and community-based organizations in Detroit, Michigan (Schulz et al., 2005). The HEP survey was a stratified two-stage probability sample of occupied housing units, designed to collect longitudinal data through interviews of adults 25 years of age and older across the three Detroit neighborhoods, The study design allowed for comparisons of residents of similar demographics across geographic areas of the city. The survey was conducted in August 2008-July 2009 with 461 completed interviews.

For our analysis we fitted 3 level multivariate linear HLM models including weighted descriptive statistics at the individual and neighborhood level. Level 1 control variables for each respondent included age, sex, race/ethnicity, education, household income, length of residence in neighborhood, and whether the respondent was currently in the labor force. Level 2 variables (at the neighborhood level) include the percent of population below the poverty level.

Conclusions
This study advances the field by extending more traditional planning studies to include syntactic characteristics of the neighborhood built environment. Urban neighborhoods that are well connected both locally and in the larger urban area, and those that are higher in density with a heterogeneous land-use mix, were found to be associated with higher levels of localized physical activity. These findings suggest the importance of considering combined effects of multiple measures of the built environment in understanding their independent and joint relationships to physical activity. Neighborhood typologies can provide urban designers and planners with ‘image-able’ sets of environmental characteristics to be applied in creating healthy neighborhood environments.

Support/Funding
The Healthy Environments Partnership (www.hepdetroit.org) is affiliated with the Detroit Community-Academic Urban Research Center (www.sph.umich.edu/urc). We thank the members of the HEP Steering Committee for their contributions to the work presented here. This study was supported through a grant from Health and Human Services, National Institutes of Health (R01 ES014234-05).