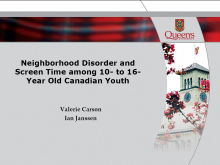 Objectives
The purpose of this study was to examine the relationship between a comprehensive measure of neighborhood disorder with television, computer, and video game use among a large sample of youth in grades 6-10.

Methods
Results are based on the Canadian 2009/10 Health Behavior in School-Aged Children Survey (HBSC). This survey included a cross-sectional sample of 15,635 youth in grades 6-10 who attended 291 schools across the country. Thirteen area-level items of neighborhood disorder were measured using the HBSC student questionnaire (3 items), the HBSC administrator questionnaire (4 items), and Geographic Information Systems (GIS, 6 items). The student questionnaire measured perceptions of safety, stranger danger, and good places to spend free time. Average values for students at each school were calculated and each student from that school was assigned the average value for their school. The administrator questionnaire, completed by the school principal or designate, measured perceptions of racial/ethnic/religious tensions, drugs/drinking in public, gangs, and crime in the school’s neighbourhood. GIS in combination with CanMaps Streetfiles, CanMaps Route Logistics, PCensus for MapPoint and Google Earth Street View software measured residential stability, traffic speed, litter, graffiti, vacant or abandoned buildings, and conditions of buildings/grounds within a 1 km radius circular buffer surrounding each school. Consistent with previous research examining neighborhood disorder, these 13 items were classified into social (7 items) and physical (6 items) neighborhood disorder categories. Principal component analysis was conducted to create summary social and physical neighborhood disorder variables and each variable was categorized into quartiles. Total hours per week of television, video games, and computer use were calculated based on weighted means for weekday and weekend use, as reported by students. Each screen time variable was categorized into quartiles and the highest quartile was used to denote high use. Multivariate multilevel logistic regression analyses were used to examine the relationship between social and physical neighborhood disorder and individual screen time variables, after adjusting for a variety of confounders.

Support/Funding
This study was supported by research agreements with the Canadian Institutes of Health Research, the Heart and Stroke Foundation of Canada, and the Public Health Agency of Canada. VC was supported by a CIHR - Frederick Banting and Charles Best Doctoral Award. IJ was supported by a Canada Research Chair and an Early Researcher Award from the Ontario Ministry of Research and Innovation.