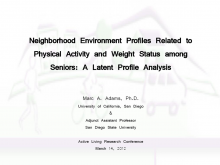 Background
Improving characterizations of neighborhoods could increase explanation of physical activity and health outcomes and lead to more comprehensive recommendations for urban planners. A difficult challenge is how to capture the cumulative influence of multiple complex features of built, recreation, and social environments that coexist. Several approaches hold promise including a priori selection of disparate variables for a single index (such as walkability), tests of interactions, factor analysis, and classifying individuals into subgroups based on multidimensional patterns.

Latent Profile Analysis (LPA) is a powerful model-based statistical approach to identify homogeneous subgroups of individuals and classify them based on response patterns. LPA is more flexible than traditional cluster analysis, and unlike factor analysis, LPA can be used to classify individuals. LPA can go a step beyond a walkability index, and even interaction testing, by accounting for numerous aspects of neighborhood design including: macro-scale walkability, micro-scale, social, and neighborhood access features. This approach could be especially helpful if specific neighborhood patterns or typologies are identified that have functionally different relationships with health-related outcomes.

Objectives
The present study explored whether a latent profile analysis could classify older adults based on reports of their neighborhood built, social, and recreation features that are conceptually related to physical activity (PA), and tested whether older adults' PA and body mass differed by neighborhood profiles.

Methods
Participants (66-97 years old, 52.9% female, 29.2% racial/ethnic minority) were recruited between 2005 to 2008 from block groups diverse in built environments and neighborhood income in Baltimore, MD - Washington, DC (n = 360) and Seattle-King County, WA (n = 368) regions. Latent Profile Analyses were conducted separately in each region with 11 continuous indicators from the Neighborhood Environment Walkability Scale. Participants were classified into one of the profiles based on their highest posterior probability. ANCOVA models (with posthoc tests) tested for construct validity of neighborhood profiles by examining relationships to PA (accelerometer-derived moderate-to-vigorous PA minutes/day, self-reported hours/week walking for errands and leisure) and self-reported BMI.

After adjusting for covariates, participants differed significantly on accelerometer-derived MVPA by neighborhood profile in Baltimore-Washington and Seattle regions, respectively (both omnibus p values ≤.05). Profiles in the two regions also differed significantly on self-reported hours of walking for errands, after adjusting for covariates (both omnibus ps ≤.001). Profiles differed by as much as 68.4 minutes/week for MVPA, and as much as 66 minutes/week for reported walking for errands. In the Baltimore / DC region, neighborhood profiles differed by about 44 minutes/week for reported leisure activity (omnibus p ≤.05), and in the Seattle region profiles differed by 1.83 kg/m2 for self-reported BMI (omnibus p ≤ .05). The High Walkable/Recreationally Dense profile was associated with the best outcomes for multiple health related variables in both regions.

Conclusions
Neighborhood profiles in each region were associated with statistically significant and practically important differences in older adults’ objectively measured and self-reported physical activity, even though the derived number of neighborhood profiles and associations with the outcomes examined differed slightly by region. The differences in MVPA across profiles (68.4 min/week) were larger than differences based on objectively assessed high versus low walkability in other analyses (17.5 min/week). This application of LPA maximized neighborhood classification by including crime safety, pedestrian facilities, public transportation and recreational access in addition to measures of walkability (i.e. land use mix, residential density, street connectivity, and retail density) comprised within current walkability indexes. It is well known that neighborhoods include built, social, and recreation environment features that exist simultaneously, but the specific combination patterns that occur among these features are less well known. Both youth and seniors are highly sensitive to the design of the neighborhoods in which they live because a large proportion of both groups do not drive and do not work outside of the home. Optimal neighborhood profiles could lead to recommendations for changes in city planning practices and policies.