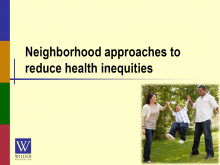 Background
A large and growing research base describes health inequities based on race, ethnicity, and socioeconomic status. According to the University of Wisconsin Population Health Institute, these factors and other social determinants of health account for 50 percent or more of a person’s health outcomes. While Minnesota prides itself on its state-of-the-art clinical care system and generally high health rankings in comparison to other states, this study, commissioned by the Blue Cross Blue Shield Foundation of Minnesota in 2010, revealed significant health inequities in the 7-county Metro region (including Minneapolis, St. Paul, and surrounding suburbs).

The Statewide Health Improvement Program (SHIP) initiative in Minnesota has addressed health disparities by implementing research-supported interventions to reduce obesity and tobacco use. During the past two years, Wilder Research has served as the evaluator for multiple local public health departments that received SHIP funding. While it is too early in the project to measure changes in health outcomes that occurred through SHIP, process evaluations were conducted to identify promising strategies that can be used by communities, schools, and worksites to implement healthy living interventions.

Objectives
During this presentation, we will:

Methods
In the health inequities report, death data, provided by the Minnesota Department of Health were used to estimate life expectancy and mortality, which served as a proxy for resident health status. Recent census (2000 and 2010) and American Community Survey data (2005-09) were used to calculate population estimates of key demographic variables, including race/ethnicity, household income, educational status, employment status at the neighborhood level, based on census tract.

Results
In Minnesota’s 7-county Metro region, health inequities based on race, ethnicity, socioeconomic status do exist. Notable results from the 2010 study show that in this region:

Since 2000, there have been large demographic shifts in the Twin Cities Metro region.  Results from the current study will be highlighted during the presentation.

Conclusions
Despite Minnesota being regarded as a “healthy state”, good health is distributed unequally among residents, based on race, income, and place. To increase the health of all residents, targeted interventions are needed in response to social determinants of health which produce poor health outcomes. Lessons learned in the first two years of the SHIP initiative suggest promising approaches that can be used by other communities, schools, and worksites, to successfully implement healthy living initiatives.

Support/Funding
The initial health inequities study, conducted in 2010, and expanded in 2011, was funded by the Blue Cross Blue Shield Foundation of Minnesota. Funding for SHIP was allocated by the Minnesota Legislature in 2008 and administered by the Minnesota Department of Health.