Park Use and Corresponding Physical Activity among Adolescent Girls

Park Use and Corresponding Physical Activity among Adolescent Girls 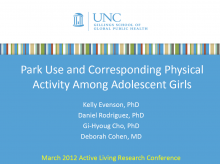 Background
Due to concern about United States (US) levels of physical activity among youth, in 2009 the American Academy of Pediatrics released a policy statement promoting environments and policies favoring physical activity, such as consideration of easier access to parks and open space. Parks provide free or low cost public space for physical activities to occur. Studies have identified presence of parks near adolescents’ home as being positively associated with walking and moderate-to-vigorous physical activity (MVPA). However, using systematic observation of park users across a variety of parks, a number of studies in the US indicate that the lowest absolute number or proportion of park users are adolescents in comparison to younger children or adults. Moreover, in observational studies, park use is consistently lower among females than males, regardless of age category, and they usually engage in a lower prevalence of vigorous physical activity compared to males. More recent studies have incorporated global positioning systems (GPS) to address the concern for improved specificity in measuring and contextualizing where physical activity occurs.

Objectives
The objective of this study was to describe park usage and to determine the contribution of parks to physical activity among adolescent girls. Secondarily, we explored differences in park usage by poverty status. These research questions were explored with control participants located at two sites from the Trial of Activity for Adolescent Girls (TAAG) Study using both cross-sectional and longitudinal data.

Methods
Girls from San Diego, California (n=139) and Minneapolis/St. Paul, Minnesota (n=142) wore a GPS monitor (Foretrex 201) to determine location and an ActiGraph accelerometer (#7164) to determine physical activity over the course of six consecutive days. MVPA bouts were defined as periods of >=3000 counts/minute for >=10 minutes, allowing for 30% of counts to fall below the threshold. Participants were measured twice: approximately half of the sample was measured in 10th and 11th grade, while the other half was measured in 11th and 12th grade. Using a standardized algorithm linking the (i) GPS data, (ii) accelerometer data, and (iii) geographic information system database around home and school locations (including park polygons), we determined park visits. T-tests compared differences between MVPA bouts and duration in parks versus elsewhere.

Results
During the first measurement period over 6 consecutive days, girls visited the park on average 0.4 times over the 6-day period (standard deviation (SD) 0.76). Girls did not usually visit the park closest to their homes (mean 0.3 miles). Instead they usually visited more distant parks (mean 11.7 miles). The average distance from their school to the parks they visited was 12.1 miles. The average duration of park visits was 19.3 minutes (SD 61.3). On the days when a park was visited, the number (0.5 bouts) and duration (9.7 minutes) of MVPA bouts was higher than on days when a park was not visited (0.3 bouts, 4.9 minutes; p<0.01 for both). On average, 8.1% of the time involved MVPA on days where girls visited the parks and 2.1% involved MVPA on days where girls did not visit the park. Both the number of park visits and duration of park visits did not significantly differ by poverty status (high vs. low). Each of these findings showed similar results for the second measurement period.

Conclusions
The number and duration of MVPA bouts was higher when girls visited parks than when they did not. These findings support the importance of parks as a physical activity resource for adolescent girls.