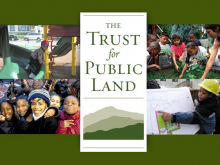 Background:
The Trust for Public Land (TPL) is leading the Parks for People - San Francisco Initiative to rebuild three parks in San Francisco neighborhoods with a high need for safe and accessible outdoor recreational resources. TPL is engaging community members in a participatory design process for each park and will complete the three parks by 2012.

Recognizing the rising concerns of childhood obesity and diabetes and the role that urban parks can have in offering opportunities for physical activity, TPL partnered with RAND Corporation and San Francisco Department of Public Health (SFDPH) to study the health impact of park renovations.

Methods:
The parks selected for renovation are 0.6, 1.0 and 25 acres in size; all are in diverse, low-income neighborhoods with high populations of children.
TPL used a variety of outreach and workshop tools to gain significant community participation including hiring community liaisons; providing language translation for flyers and meetings; holding a variety of meetings, breakout sessions and focus groups; using graphics and photos, verbal and written surveys; mapping and design exercises. In addition, TPL surveyed park users and local residents about socio-demographic data along with their park use and physical activity habits and preferences.

RAND Corporation provided the System for Observing Parks and Recreation in Communities (SOPARC) research and data collection methodology to evaluate the impact of renovations on park use and physical activity. Using SOPARC, TPL observed use in the three renovation parks and in three comparison parks that correspond to the renovation parks in size and socio-demographics of local populations. RAND analyzed the data results.
SFDPH provided and interpreted local Pedestrian Environmental Quality Index (PEQI) data on streets and traffic, noise and pollution conditions, tree canopy and neighborhood amenities. TPL used the SOPARC and PEQI data results to inform the final park designs.

419 residents and 503 park users completed surveys for the three renovation parks. While patterns of use differed substantially between the parks, between 13% and 41% named the parks as the place they usually exercise. While more than half of respondents said they do not currently exercise at the park, many reported they would consider it if the park had features like free fitness equipment, jogging paths, special programs or classes. In all parks, walking was named the most common form of exercise and most respondents said they walked to get to the park.

Through the community design process, TPL collected qualitative and quantitative data regarding park user and residents’ views on problems with the existing parks, ideas on how to make parks more attractive, and specific design features that would encourage park use and physical activity. Common problems to all three renovation parks were limited visibility, outdated equipment and poor layout. Park users and residents expressed preferences for overall park design and park features such as walking paths, outdoor fitness equipment, basketball courts, lawns, and flexible areas for exercise like Tai Chi and dancing. Preferences varied per park.

Conclusions:
TPL used the community feedback and baseline data from the SOPARC observation, park use surveys and PEQI analysis to create park renovation designs that will support active park use. The designs are unique to each park and include features to promote physical activity, as selected by each community.
Each design expands play areas to accommodate children of multiple ages and accommodates the community’s preferred form(s) of active recreation. The designs include pedestrian-friendly entrances and traffic calming where appropriate, as well as increased lines of sight to support safety.
Once the parks are constructed, TPL will return to perform follow-up data collection to determine whether the renovations resulted in an increase in physical activity among youth.