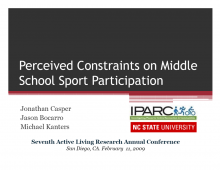 Background:
Sport participation offers children a viable means to acquire the recommended level of PA (Katzmarzyk & Malina, 2000). However, sport participation declines significantly among both boys and girls during middle school years (Hedstrom & Gould, 2004). Despite the decline in sport participation associated with middle school children, little research has examined patterns in sport and physical activity participation and the setting in which it occurs (Hawkins & Mulkey, 2005; McKenzie, 2001). Furthermore, there has been very little research examining constraints particularly among non-participants. Constraints research investigates factors that are perceived or experienced by individuals inhibiting participation and enjoyment in leisure activities (Jackson, 2000). This study examined the role of perceived constraints specific to sport participation among middle school students, including those that have never played sport. The study findings are of particular importance because they provide evidence for policy changes that can reduce the impact of constraints and enhance opportunities for increased activity among children.

Methods:
This study was part of a larger project examining the impact of middle school extracurricular sport policies. Study participants (n = 2439) were recruited from four public middle schools in a southeastern United States city. Students completed a web-based questionnaire at the beginning of the school year.

Results:
The majority of respondents (69%) indicated that they would like to play sports more often. Although students reported low perceived constraints (construct means < 2.50 on a 5-point scale), analysis based on participation found significant difference based on participation type for each of the constraint constructs (F-values between 6.13 - 26.75; p-values <.001). Not surprisingly, non-sport respondents reported significantly (p < .01) higher perceived constraints compared to all other groups. Students who only participated in school sport (intramural and/or interscholastic) reported higher constraints than those who only participated in sport outside of school. Interscholastic and outside sports participants reported the lowest levels of constraints overall.

Conclusions:
This study showed the importance of two major constraints: accessibility and lack of knowledge. This was especially true for non-sport participants, girls and Hispanic children. Hispanics reported greater accessibility and knowledge constraints suggesting the need for greater outreach efforts to inform parents (and their children) about sport opportunities and benefits available to them. Efforts to get middle-school-age children involved should focus on these two factors. An important finding is that students who played a combination of school and community sport perceived the lowest constraints. Having access to a combination of community-based sport (including places for informal sport participation) and school sport resulted in higher levels of participation. Identifying specific constraints enable policy-makers and administrators to be more deliberate in targeting non-participants. For example, policy strategies could include partnerships and joint-use agreements to increase accessibility or more coordinated efforts to market, educate, and reach out to non-users particularly groups who perceive the highest constraints.

Support:
This research was supported by a grant from the Robert Wood Johnson Foundation’s Active Living Research Program (#63529).