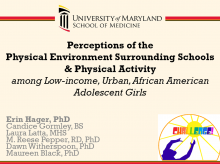 Methods
A sample of 293 6th and 7th grade girls from 12 low-income, urban, predominantly African American middle schools were recruited to participate in an obesity prevention trial and given an Actical accelerometer (Phillips Respironics, Inc.) to wear on their ankle for >7 consecutive days to assess physical activity. The first and last days of data were truncated and up to 7 full days of data were retained. Minutes in moderate-vigorous physical activity (min-MVPA) were determined using a previously validated cut-off of 3200 counts/minute. Body composition was assessed by calculating BMI-for-age percentiles from height and weight measured in triplicate. Questionnaires were administered using audio enhanced computer-assisted software. Perception of the physical environment around the school was measured using a 10-item questionnaire (Evenson et al. 2007) addressing safety, aesthetics, and access to physical activity facilities. This Perceptions of the Physical Environment Questionnaire (PPEQ) was adapted by changing the phrase “near your home” to “near your school”. The PPEQ was analyzed using a mean score. Schools were dichotomized by median PPEQ score across participants (more positive versus less positive). Spearman correlations were used to determine the bivariate relationship between PPEQ and min-MVPA. T-tests were employed to examine mean differences in PPEQ and min-MVPA by grouping variables. Linear regression models were conducted to determine the relationship between perceptions and physical activity controlling for covariates.