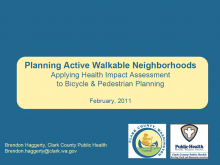 Background:
In Clark County, Washington, the Public Health Department collaborated with the Department of Community Planning to conduct a Health Impact Assessment on the county’s bicycle and pedestrian master plan. The project represents a successful partnership between public health researchers, planners, and policy makers, formed to integrate health into built environment decision making.

Objectives:
The core objective of the Planning Active Walkable Neighborhoods project is to understand the role of health impact assessment and health information in policy decisions related to the built environment. The project included a rapid HIA to provide input on the plan, a comprehensive HIA to analyze the plan’s impacts on health and equity, and an analysis of how policy-makers used the HIA in the decision making process.

Methods:
Using GIS, determinants of health were mapped to establish baseline conditions and determine the distribution of impacts to various sub-populations based on proximity to infrastructure projects. Impacts were estimated using relationships established in research literature. The research emphasized impacts on children and on populations at greater risk for obesity. Findings from these analyses were reported in the form of a HIA and disseminated among stakeholders and community groups. Key informant interviews were used in conjunction with other qualitative research methods to elicit essential themes of the decision-making process and to determine how policy makers used the HIA in approving the final plan.

Results:
Through partnership between two departments and in the process of conducting the HIA, health and equity were integrated into project prioritization criteria. Bicycle and pedestrian projects were selected based partly on their potential for increasing opportunities for physical activity and reducing health disparities. Though subject to change, the initial weighting of health impacts as a criterion was 20 percent of the total points available in the system devised to score proposed projects. Health concerns proved to be a compelling factor in the approval of the final plan. Additionally, the cooperative relationship between planning and public health resulted in continued collaboration on a subsequent HIA, as well as a health chapter to be included in the county’s comprehensive plan update.

Conclusions:
Preliminary findings indicate that a partnership which begins early in the planning process offers the opportunity for heightened collaboration, understanding, and articulation of mutual goals. It also offers the opportunity for health interests to directly influence the planning process, priorities, and outcomes. While health impacts are only one of many concerns relevant to urban planning to efforts, they are sometimes among the most interesting and compelling for policy- makers. Future efforts should include health impacts as a matter of routine rather than through a specialized, stand-alone project.

Support:
The Planning Active Walkable Neighborhoods project was funded by a grant from Active Living Research, a project of the Robert Wood Johnson Foundation.