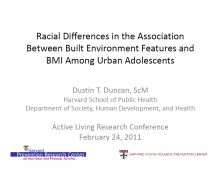 Background:
The elevated prevalence of adolescent obesity and its consequences presents a pressing public health issue, especially for racial/ethnic minorities. Racial/ethnic minority adolescents have heightened rates of obesity and NHANES trend data indicate that racial/ethnic minority adolescents have had statistically significant increases in obesity from 1988-1994 to 1999-2000 (while non-Hispanic White adolescents have not). Neighborhood environmental factors (e.g. access to walking destinations and community design) may be a source of adolescent obesity and obesity-related health disparities (albeit the findings from studies have been inconsistent). A major potential reason for these inconsistencies may be due in part to the fact that the vast majority of studies have not accounted for spatial dependence in regression models. However, emerging research indicates that spatial clustering of obesity-related outcomes may exist. It is well known that a-spatial regression methods are predicated on the assumption of spatial independence of observations.

Methods:
Data come from the 2008 Boston Youth Survey, a representative survey of Boston public high school students. Of the 2,725 students enrolled in the classrooms selected for participation, 1,878 completed a survey and 1,295 provided valid home street intersection locations. The analyses for the present study include data collected from students who had verified georeferenced residential information and had data on physical activity and sedentary behavior as well as height and weight data. Using street network buffers of 800 and 400 meters to define the youth’s neighborhood environment, we built a spatial database using geographic information systems (GIS) technology with ArcGIS 9.3, creating the following environmental variables: parks per sq km; count of bus stops; count of subway/rapid transit stops; walking destinations for retail, services, and cultural/educational activities per sq km; walking destination mix; residential density per sq km; fraction of road with a sidewalk; average sidewalk width in meters; intersections per sq km; and median pedestrian route directness. GIS data layers came from commercially purchased business (i.e. Info USA) and publicly available neighborhood-level (e.g. Mass GIS) datasets. Moderate-to-vigorous physical activity, television viewing and BMI z-score were the outcomes for this study. Various individual (i.e. age, gender, nativity, race/ethnicity) and neighborhood (i.e. neighborhood racial/ethnic composition and neighborhood socioeconomic disadvantage) characteristics were also included in this study. We first conducted exploratory spatial data analysis, including visualization and cluster detection. Visualization was conducted in ArcMap 9.3 to map key study variables and to visually examine patterns across space. Then, global cluster detection was conducted with a Global Moran’s I to evaluate whether there is spatial autocorrelation for the outcomes. Next, we fit ordinary least squares (OLS) regression and spatial autoregressive models as appropriate. For example, if the residuals of the OLS were not significant for spatial autocorrelation, there was no indication that a spatial model is needed. If evidence for a spatial effect was found, spatial error regression models, estimated via maximum likelihood, were fit. The spatial weight matrix, which provides the structure of assumed spatial relationships, was specified as k nearest neighbors (n=4). The models were conducted using the total sample as well as stratified by race/ethnicity adjusting for potential confounders and clustering of students within schools.

Results:
Respondents were predominantly non-Hispanic Black or Hispanic (>75%) and live in neighborhoods across the city with racial/ethnic populations and socio-economic characteristics that vary. Preliminary analysis indicates that the Global Moran’s I for physical activity was 0.82, for TV watching 0.76, and for BMI z-score 0.87 (all p<0.001). We anticipated that access to waking destinations as well as community design will be positively associated with physical activity and inversely associated with TV watching and BMI, consistent with current literature. We also anticipated that these associations will vary by race/ethnicity and vary depending on the definition of the neighborhood used. Preliminary analysis examining environmental correlates of the physical activity indicate that the residuals from the OLS models were all significant for spatial dependence and the findings from the spatial autoregressive models predicting physical activity support some (but not all) of our hypotheses. The final analyses will be completed by Fall 2010.

Conclusions:
Using cutting-edge spatial statistical methods, our preliminary results add to the accumulating research indicating that neighborhood characteristics are implicated in adolescent obesity risk and provide empirical support for using spatial models in research examining associations between neighborhood characteristics and obesity-related outcomes. These results also will inform the development of neighborhood-level interventions and policies to thwart the staggering rates of obesity among adolescents, especially perhaps for racial/ethnic minorities.

Support:
This project is funded by an Active Living Research Dissertation Award from the Robert Wood Johnson Foundation (Grant # 67129).