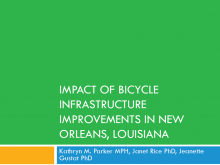 Background
Regular exercise and a healthy diet can help people achieve a healthy weight. Active transportation, such as biking and walking, to meet daily needs such as shopping and going to work or school, is one way for people to fit regular exercise into a daily schedule. Changing the built environment by adding bike lanes can encourage more children and families to become physically active. Devastation caused by the hurricanes of 2005 created a unique opportunity to rebuild streets in New Orleans, LA, and make them safer for cyclists. The New Orleans Department of Public Works and the Louisiana Department of Transportation and Development worked together to create a 1.2-mile bike lane on South Carrollton Avenue in Uptown New Orleans. The bike lane was constructed 5-feet wide and located between the parking lane and the outside travel lane. Previous research conducted on other bike lanes in New Orleans showed increases in the number of people using bike lanes, but results were limited by a lack of comparison streets.

Methods
In September 2009 (mean temperature 79.4°F) and September 2010 (mean temperature 78.1°F), trained observers conducted manual counts of cyclists riding on South Carrollton Avenue, where a new bike lane was built in June 2010. Concurrently, observers counted cyclists on two adjacent side streets where there are no bike lanes. The observation location on the intervention street was directly adjacent to a public school that housed kindergarten through eighth-grade students. Cyclists were counted riding on the street (both in and outside of the bike lane) and sidewalk, with and against traffic, before and after the bike lanes were built. All observations were categorized by gender, race and approximate age. Data were collected continuously over a one-week period for each location for 11 hours from 7 a.m. to 6 p.m., five days a week (Tuesday, Wednesday, Thursday, Saturday and Sunday). During periods of light rain, observers continued to take data, but if rain was heavy, observations were canceled for that day and rescheduled for the same day of the following week. Differences were tested with Poisson regression and logistic regression, with a p-value of 0.05.

Conclusions
Bike lanes can have a positive impact in creating a healthy community. Installation of bike lanes can increase the number of cyclists in a neighborhood. Streets with bike lanes will attract more cyclists than streets without bike lanes. Installing bike lanes on roads can be a low-cost mechanism to improving physical activity in urban areas.