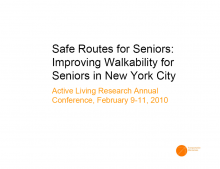 Background:
Safe Routes for Seniors was initiated to improve the pedestrian environment in New York City as a means of enhancing cardiovascular health of senior citizens, a rapidly growing population. Walking is one of the easiest, least expensive ways for people to get exercise and reduce their risk of obesity, heart disease and all-cause mortality. Often the built environment does not support walking, even in dense urban metropolitan areas, regarded as desirable places to walk because of the closeness of daily life destinations such as grocery stores, schools and public transit and ample sidewalks. In New York City, seniors suffer disproportionately from pedestrian injuries and fatalities caused by motor vehicle crashes. Seniors are 13% of the population but constitute 33% of pedestrian injuries and fatalities citywide. By 2030, the City will experience a 44.2% increase in the population of senior adult residents 65 and over, above current numbers (938,000).

Objectives:
The four major objectives of the Safe Routes for Seniors program were:
• Work directly with seniors in underserved communities to identify obstacles to walking
• Develop a set of design solutions that would remove obstacles to walking for seniors
• Advocate for and win physical changes on the street
• Advocate for local government adoption of street safety improvements targeted at seniors

Methods:
Over the past six years, Transportation Alternatives worked with senior citizens in eight New York City neighborhoods. In each community, we co-organized meetings with local partners and seniors to better understand specific, local obstacles to walking. Common concerns emerged, such as not having enough time to cross the street during the walk cycle or turning vehicles not yielding. Seniors helped document dangerous walking conditions using maps, measuring wheels, stop watches and disposable cameras. Our presentations and focus groups included a mini-training session on how traffic-calming works and its importance. Each workshop included a survey about the most common destinations for senior citizens. For most neighborhoods, we developed design recommendations to address senior pedestrian needs.

Results:
Common concerns about walking emerged from surveys and workshops. Seniors are very compliant pedestrians; they often cross the street with the walk signal and in the crosswalk. However traffic control devices often inadequately support senior pedestrian needs. For example, there is frequently not enough time for a senior to cross the street because traffic signals are timed for a pedestrian walking at 4 feet per second. Our research found that on average seniors walk at 2.5 feet per second. Another common example is that turning vehicles often do not yield to senior pedestrians in the crosswalk.

We assume that seniors living immediately adjacent to the improved intersections benefit from the physical changes because they must cross the street to visit popular daily destinations such as the grocery store or the bus stop. According to 2000 Census tract data, there is an estimated 26,913 seniors who have benefited or will benefit from the safety enhancements we advocated for. Furthermore, these changes make the streets safer for the additional tens of thousands of pedestrians who walk through these intersections every day.

Over six years, nearly 2,000 senior citizens attended our workshops and focus groups. In January 2008, the New York City Department of Transportation adopted a Safe Streets for Seniors program. The NYC DOT has committed to making senior safety improvements in 25 neighborhoods by 2010.

Conclusions:
High density, mixed-use environments with sidewalks are thought to be very walkable environments, but without additional physical traffic controls on the street such environments are not safe enough for all pedestrians. Seniors obey traffic laws as pedestrians yet they still suffer disproportionately from pedestrian severe injuries and fatalities as a result of motor vehicle crashes. The departments of transportation in municipalities have inexpensive, industry-accepted solutions to improve walking environments for senior citizens. Cities should consider adopting a Safe Routes for Seniors program which like Safe Routes for Schools would target physical improvements at a more vulnerable segment of the population as a way of encouraging physical activity.

Support:
Safe Routes for Seniors was funded for six years by the New York State Department of Health’s Healthy Hearts program, a program that aims to reduce levels of cardiovascular disease by targeting funding in prevention programs such as nutrition and physical activity.