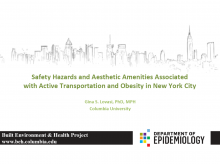 Background
The most common and accessible adult physical activity is walking, and neighborhood streets are the most common walking venue. Neighborhood built environments provide an opportunity to support walking and other physical activities. Neighborhood physical activity predictors most commonly assessed using Geographic Information Systems (GIS) data include socioeconomic measures (income, education, deprivation) and indicators of walkable urban form (density, land use mix, connectivity). However, residents report that local safety and aesthetic problems can be important barriers to physical activity in the neighborhood. Independent assessment of safety and aesthetic characteristics through GIS data can help to identify the influence of the environment on behavior by limiting reverse causation and information bias.

Objectives
We used geographic and survey data from New York City to evaluate the associations of safety and aesthetic characteristics with walking and bicycling. We hypothesized that pedestrian-auto fatality density and homicide density would predict lower participation in these physical activities while aesthetic amenities would predict more activity. In addition, we examined effect modification by neighborhood poverty and gender, hypothesizing stronger associations among high poverty neighborhoods and, for safety hazards, among women.

Methods
We used data from the Community Health Survey, a random digit dial survey in New York City. All respondents in 2003 were asked whether they had walked or bicycled for at least 10 blocks in the past 30 days. Residential ZIP codes were linked to GIS data on pedestrian-auto fatality density, homicide density, presence of sidewalk cafés, street tree density, and percent of sidewalks rated as acceptably clean. Generalized linear regression models were estimated with adjustment for individual (age, sex, education, income, race, ethnicity, birth outside of the US, marital status, children in the household, and health status) and neighborhood (percent poverty, population density, land use mix, and transit stop density) characteristics. Robust standard errors were used to relax assumptions of a Poisson variance distribution and to account for clustering within ZIP codes. Stratification by neighborhood poverty (median split) and gender was used to assess effect modification. ZIP code-level sample weights were calculated using population estimates by race/ethnicity, age, and sex from the 2000 Census.

Results
Results from adjusted models are shown in the Table, with safety and aesthetic characteristics entered separately, simultaneously, and stratified by area poverty. Pedestrian-auto fatalities were associated with a lower probability of walking or bicycling, and there was also a parallel but non-significant trend for homicides. Sidewalk cafés predicted more walking or bicycling, particularly within low poverty areas. Street trees were also associated with more walking or bicycling within low poverty areas, and the interaction between street trees and area poverty was marginally significant. We did not detect significant effect modification by gender and, in contrast to our hypothesis, safety hazard associations tended to be closer to the null among women.

Conclusions
Pedestrian-auto fatalities and sidewalk cafés were associated with the likelihood of walking or bicycling in the hypothesized directions. We did not find support for hypotheses that associations would be stronger in high poverty areas or among women; in fact, there was a trend for sidewalk cafés and street trees to be more predictive in low poverty neighborhoods. Key strengths of this analysis include the large sample size, weighted to represent New York City residents, providing sufficient statistical power to evaluate effect modification. However, reliance on self-reported physical activity contributes to measurement error, and may also introduce bias if over-reporting of physical activity is particularly prevalent in safe or aesthetically attractive areas. In addition, the neighborhood definition used in this study was based on postal ZIP codes, an administrative unit that does not correspond perfectly with the mental maps of residents or the areas they access throughout the day. This analysis, along with future studies with attention to aesthetic and safety characteristics and to effect modification, can help to inform efforts to make urban environments more supportive of physical activity.