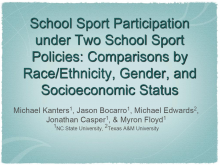 Background
Schools have been identified as a primary institution for promoting physical activity among youth (McKenzie & Kahan, 2008). Unfortunately, opportunities for physical activity during the school day and school-based extracurricular sport participation have declined in recent years particularly among middle school aged students (Sallis & Glanz, 2006). More inclusive alternative policies for school-based sport (e.g., intramurals) that emphasize participation may facilitate more opportunities for more children to participate in a wider variety of sports. However, the effect of school sport policies and students’ social and cultural background on sport participation during the middle school years is largely unknown.

Methods
Data were obtained through an online survey administered at four public middle schools (grades 6-8) in a southeastern U.S. city. Two schools delivered sports exclusively through an intramural sports program (IM). Two population-matched schools that offered interscholastic sports (IS) exclusively, were selected for comparison. A total of 2,582 (response rate = 89.8%) students completed the survey. School sport participation was measured by asking students to identify school sports in which they had participated during the school year. Students were also asked to indicate any sports played outside of school (i.e., community sponsored sports). Participants also indicated their gender and race/ethnicity. Eligibility for free or price reduced lunch at school was a proxy for SES. Chi-square analysis was used to test for associations and logistic regression models were estimated to examine the probability of school sport participation based on each socio-demographic characteristic measured in the survey.

Conclusions
Study findings indicated that a more inclusive sport model attracted more student participation, particularly among students from low income and minority households. However, even though sports were co-educational at IM schools, participation remained male-dominated. This finding supports previous research that co-educational sports often retain more masculine sport values (e.g., aggression) and therefore girls may be less inclined to participate in these activities (Henry & Comeaux, 1999). Students from low income and/or Black households were more likely to participate in school sport if they were attending IM schools. Previous research suggests that roster limits imposed at IS schools’ sports programs may have prevented Black youth from participating in sports that were perceived to be culturally appropriate (e.g., football and basketball). However, sports programs at IM schools imposed no limits on participation. The removal of structural barriers at IM schools may have encouraged participation by Black students in sports traditionally dominated by White students at IS schools. Consequently, the addition of intramural sports as a complement to, or in replacement of, existing interscholastic sport programs could encourage participation among a larger segment of the population and in particular, students from low income or racial minority families.