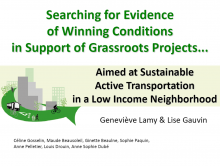 Objectives
This presentation describes the implementation process surrounding grassroots projects aimed at sustainable transportation in a low income neighborhood and assesses the extent of intersectoral collaboration and linkages of actions.

Methods
The current study is part of a larger initiative named “Healthy Canada by Design” - a Canadian coalition of health units, planning organizations, and non-governmental organizations that came together to unite existing and emerging cross-sector efforts to promote healthy built environments by translating of the latest research into state-of-the-art intervention tools. The Montreal-based arm of the coalition focused on community mobilization by conducting a three-pronged research project consisting of (1) analyzing grassroots projects throughout the Island of Montreal, (2) diagnosing street- and intersection-level pedestrian potential through audits in two lower income neighborhoods, and (3) describing the process of implementation of grassroots projects and their potential effects on community mobilization and built environments through interviews with key informants in the same two lower income neighborhoods. The current abstract focuses on one case study of the third component.

We conducted a case study of a low income neighborhood in Montreal Canada (36% of residents living below the low income cut-off, 52% single-parent families) which has been exposed to numerous environmental nuisances including pollution and accidents due to the presence of major road infrastructures. Information on the implementation of 10 grassroots projects aimed at sustainable transportation was collected through semi-structured interviews lasting 45 to 90 minutes. Respondents included 7 key informants from community groups, 4 municipal workers, 1 school-based representative, and 1 local public health official (response rate: 81%). Implementation processes were explored with questions on the structure (number of partners and sectors, citizen participation) and nature of collaborations (presence of consensus/conflict between partners, issues of controversy). Interviews were transcribed, coded into single-meaning segments, and then regrouped into themes by two independent reviewers. Analyses were performed with NVivo8 software.

Results
Coding lead to the identification of 981 single-meaning segments. Themes included: barriers and facilitators (256 segments; 26%), collaboration (177; 18%), citizen mobilization and involvement (166; 17%), integration of projects (137; 14%), context (69; 7%), impact of projects on active transportation (98; 10%), other (78; 8%). The 10 grassroots projects that were active in 2010 were run by 8 community groups and aimed one or more targets: accessibility of services (n=1); actions to support active transportation (n=2), security of pedestrian and cyclist travel (n=2), safety against crime (n=7), and greening of neighborhoods (n=8). Although promoting safe active travel was central in 2 projects, this target was often ancillary to another aim (e.g., accessibility to food; greening). Sustainable mobility is a focus in most projects although appearing under different guises such as choosing the site of a public market as a function of proximity of residents or integrating traffic calming measures in a project of greening of backdoor alleyways. Collaborations almost always involve partnerships with other community organizations (7 of 10) whereas partnerships with organizations in other sectors developed only when issues imperatively required it (e.g., collaboration with police for projects dealing with safety against crime, linkages with schools for active transportation to school). Even though projects dealt with transforming built environment, most linkages with municipal officials were in the office of social development and only 4 projects integrated urban planners. Citizens were represented in most projects (8 of 10) but the extent of their involvement ranged from representation on the Board of Directors and participation in subcommittees to mere participation in activities or providing financial support. Actors in community groups view their involvement as a means of citizen advocacy to influence public policies. Linkages of grassroots projects with municipal policies occurred mainly through the financing of projects.

Conclusions
Analysis of the implementation process of grassroots projects shows that collaborations develop mainly intra- rather than intersectorally. Although concern with mobility and sustainable transportation are present in all projects examined in this case study, results suggest that greater intersectoral linkages with urban planning and transportation is required to effective change of the built environment.

Support/Funding
Funded by the Canadian Partnership Against Cancer’s Coalitions Linking Action and Science for Prevention.