Showing Up to Class is Not Enough: Policies that Only Require PE Attendance Do Not Reduce Socioeconomic Disparities in Physical Activity

Showing Up to Class is Not Enough: Policies that Only Require PE Attendance Do Not Reduce Socioeconomic Disparities in Physical Activity 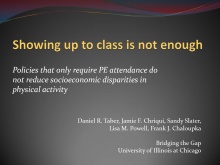 Methods
Data on student physical activity, PE attendance, and household SES were obtained for 6,300 eighth-grade public school students in 40 states in Spring 2007 as part of the Early Childhood Longitudinal Study - Kindergarten Class. Students were asked to report the number of days on which they “exercised or participated in physical activity that made them sweat and breathe hard for at least 20 minutes,” within the past seven days, and the number of days they attend PE in an average week. Student SES was measured using an index that combined data on household income, parental education, and parental occupation, as reported in an interview with parents. State policies regarding PE time requirements and MVPA during PE were compiled by the Bridging the Gap Program through primary legal research methods, and verified against secondary sources. Analyses are based on middle school policies in the 2006-07 school year.  States were categorized based on whether they had a policy requiring a minimum amount of PE per week, but no policy regarding MVPA during PE (n=9); required both a minimum amount of PE per week and a minimum amount of MVPA during PE (n=5); or had neither policy (n=26). General linear models, with an identity link, were used to estimate the differences between categories in average days of PE and average days of activity per week among 8th grade students. After estimating overall differences, interaction terms between policy category and SES quintile were used to estimate the difference between categories in SES disparities of PE and physical activity. Models were stratified by gender and adjusted for age, race/ethnicity, Census region, and locale. A robust standard error was used to account for state clustering.

Conclusions
State policies that require students to participate in PE may be effective at increasing PE attendance for the overall student population, particularly among girls, but they are ineffective at reducing socioeconomic disparities in physical activity. Policies that require a minimum level of MVPA during PE may be a more promising method of reducing socioeconomic disparities in activity among boys.