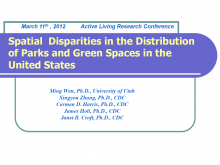 Background
Recent years have seen a growing attention to the significance of the built environment for changing individuals’ energy balance and weight status. Considering low-income and minority individuals are routinely found to be less engaged in physical activity than whites and given the presence of persistent residential segregation by income and race/ethnicity in the United States, it follows to argue that the built environment may contribute to socioeconomic and racial/ethnic differences in physical activity. However, little research has been done to determine whether this is, in fact, true. To begin with, spatial inequality in the built environment has not been well understood. Evidence of a national pattern as to how neighborhood income and minority compositions are linked to built environmental features is particularly lacking.

Methods
Data and Measures
This study is an ecological study of cross-sectional associations of accessibility of parks and green spaces with SES and minority composition at both the census tract and the county levels. Socio-demographic variables were constructed from the 2000 census data. Three SES variables were obtained including percent of college graduates, percent of households in poverty, and median household income. Two demographic variables were constructed including population density, defined as number of residents per square miles, and percent of rural population, reflecting a place’s position on the rural to urban scale.

A measure of park accessibility was constructed from the park GIS layer in ESRI ArcGIS9.3 Data DVD. It was created in 2008 with 35,436 public park or forest units in the 50 states and DC. The park dataset includes national, state, and local parks and forests. Park size and within-park centroids were generated. We adopted an innovative method to calculate census tract or county’s park accessibility. Specifically, we identified seven closest parks to a centroid of the focal place (i.e., tract or county) and calculated population-weighted average distance from the centroid to these seven parks as a spatial measure of park (in) accessibility.

For green space accessibility, multi-scale analyses generated different results. At the tract-level, the results were all expected and consistent with our hypotheses. Poverty and minority concentrated neighborhoods were underexposed to green spaces. However, county-level analyses found that counties of higher poverty rates actually were better covered by green spaces and this association was not attributable to the county’s population density or rurality.

Conclusions
In this nationwide multi-scale ecological study, we expanded the environmental justice research by addressing environmental benefits at two geographic scales, census tracts and counties. The patterns revealed from our study are mixed with respect to our a priori hypotheses. While race and class are indeed important factors of spatial distribution of parks and green spaces, they do not always work in expected ways. The take-home message of this study is that poorer and minority-concentrated neighborhoods do not always lack health promoting resources and are sometimes in favorable situations compared to more advantaged and whiter neighborhoods.

Support/Funding
This research was supported by an NIH grant (R01CA140319-01A1) to the first author.