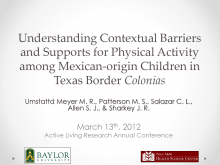 Background
The Mexican-origin population is the fastest growing racial/ethnic subpopulation in the U.S. This population growth has been occurring in the burgeoning coloniasalong the U.S. border with Mexico, especially in Texas and in new-destination immigrant communities throughout the U.S., including the Midwest, the South, the Northeast, and the Northwest. New-destination communities are characterized by a high concentration of Mexican-origin residents and rapid growth in locations previously unsettled by Mexican immigrants. As an archetype for new destination communities, coloniasare smaller, more dispersed communities comprised of disproportionately poor families of Mexican-origin with limited access to resources. This subpopulation also has the greatest risk for obesity and diabetes in the U.S. Although evidence consistently supports a positive and significant relationship between physical activity participation and a reduced risk for diabetes and obesity/overweight across all people and age groups, fewer individuals of Mexican-origin, including children, report engaging in physical activity at levels related with health benefits. Research also consistently supports relationships between physical activity and social ecological factors, namely the physical environment. However, these relationships have not been examined in colonia communities.

Objectives
The aim of this study was to identify and better understand (1) perceived barriers to colonia children engaging in physical activity and (2) salient environmental physical activity resources/supports within colonia households and neighborhoods.

Barriers
The most frequently reported barriers to physical activity, exercise, or sport by interviewed children were dogs in the street (75.0%), heat (56.3%), bad weather (52.1%), traffic (44.8%), no streetlights (44.8%), and no place like a park to exercise (41.7%). Most frequent barriers as reported by mothers for their children were similar, with the following additions: no sidewalks (49%) and children not having adequate clothing (41.8%). The least frequently reported barriers by children and mothers included immigration status, inability to leave the house or small children alone, loose farm animals, asthma, trash, crime, kidnappings, exercise isn’t fun, fear of getting hurt, and lack of encouragement.

Conclusions
This study suggests that environmental resources and barriers for colonias children are both similar to previous studies and distinctively unique. As expected, built resources for these communities are limited; however, knowledge of available physical activity resources within coloniahouseholds and neighborhoods offers insight and can help guide policy and physical activity initiatives. Future research should aim to understand physical activity options, current programming, and the social environment of colonias. Future physical activity and health initiatives targeting colonia children should use these findings to guide development and implementation. Policy makers should use these findings to help guide decisions about resource allocation within colonias and new-destination immigrant communities.